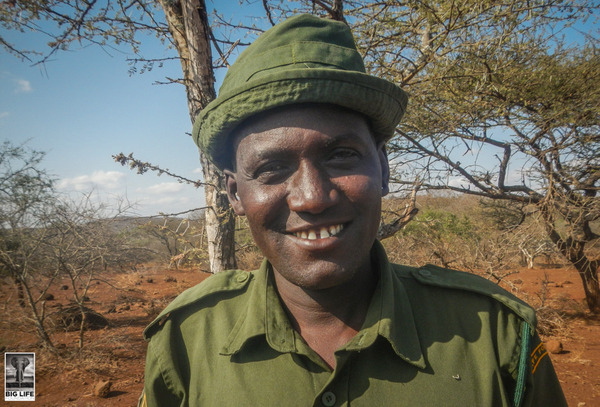 Ungani Mpompoet never received an education, not for lack of resources but because of local culture. His father was wealthy in cows, and as his only son Mpompoet was tasked with looking after them. Mpompoet accepted this role and kind of life until one fateful day when a pride of lions killed two of his father’s cows. As part of his traditional responsibilities, Mpompoet organized a band of warriors to hunt down the lions, and they managed to kill one with spears. In times past, this would have been cause for celebration, but this incident ended up with Mpompoet behind bars, arrested by Kenya Wildlife Service for his role in the killing. His father managed to pay the fine, and Mpompoet was released from jail, but he began to question his future. Looking around, others from his age group had gone to school and were benefiting from wildlife related bursaries. As Mpompoet says: “I felt a lot of pain wondering why my father had not sent me to school”. He committed himself to never hunting lions again. But life can be complicated. There came a time when his neighbour’s cows were killed by a lion, and although Mpompoet resisted, he was threatened with ridicule (from the ladies in particular) for his cowardice if he did not hunt. Luckily for the lions, the community leaders intervened in this hunt, but ordered Mpompoet to stop trying to kill animals. Frustrated, Mpompoet questioned what benefits wildlife could bring him without the education necessary for employment. Luckily for us, the leader of his community stepped in and made the connection, and Mpompoet found what he was looking for with Big Life. Mpompoet has never faltered in his commitment to what we do, and his discipline in doing it. Over time he has risen through the ranks, and now leads our Rombo unit as their sergeant. The team maintains one of the highest levels of performance of all our units, doing so in an area that is well used by experienced poachers. Through June, it was the leadership of Mpompoet that helped his team to capture a gang of game meat poachers operating in the area (see previous post).  It is for this achievement, and his otherwise tireless efforts to protect wildlife, that Mpompoet is our ranger of the month for June. He is the perfect example of a community game scout, someone who has had an opportunity to benefit from the protection of wildlife around him, and he takes great pride in doing it. Thank you, Mpompoet.