BIG LIFE RANGERS OF THE MONTH, MAY 2014: THE COMMITTED TEAM OF MOBILE ONE 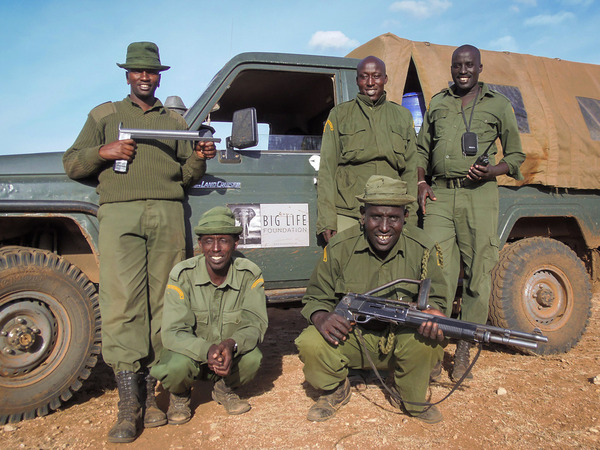 A sharp crack echoes through the night. The smell of gunpowder fills the air. The herd of elephants starts to run. Another flash and a bang, and the herd picks up speed, until they can no longer be seen.

Matayo, Lemaika, Lokida, Ndeya and Mwimo, our ranger unit collectively known as Mobile One, pack up their fireworks and walk back to the vehicle. It’s 2am. This farm is safe, for now.

And so goes every night for this superhuman team of Big Life rangers. While East Africa sleeps, they are constantly on call for reports of crop-raiding. Poaching for ivory is leaving a trail of elephant carcasses across Africa, but it is a sign of our success that in 2013 human-elephant conflict accounted for as many elephant deaths as poaching in the Amboseli ecosystem.

If conservation is to succeed in the long term, we are going to have to manage the relationship between human and animals. And Mobile One is blazing the trail. They respond to calls for help with bright torches to scare the elephants, and if necessary, thunder flashes - harmless fireworks.

In the last three nights this team has intervened in ten cases of elephant conflict alone. And more than that, when the sun comes up these guys march out on daily patrols, protecting wildlife from poaching threats in their area.

There is no doubt that their hard work is saving the lives of elephants. A farmer will only watch so much of his precious crop disappear down an elephant’s throat before he grabs his spear, or worse, a bottle of poison.

As we get deeper into the dry season the natural resources dwindle and the conflict intensifies, and without these rangers we would certainly be counting dead animals. And in saving the lives of elephants, this team is risking their own. In May, Ndeya was knocked over by a young bull elephant while trying to scare him out of a farm, and was lucky to walk away in one piece.

Some things can only be achieved with team-work, and the successful management of human-wildlife conflict is one of these. It is for this reason that for the month of June, we are awarding this whole unit the title of ‘Rangers of the Month’. We’re proud of them.

PS If you are wondering what the strange looking gun is on the left, it actually shoots fireworks, but also lights them electronically, so that no-one has to lose their eyebrows In the process.