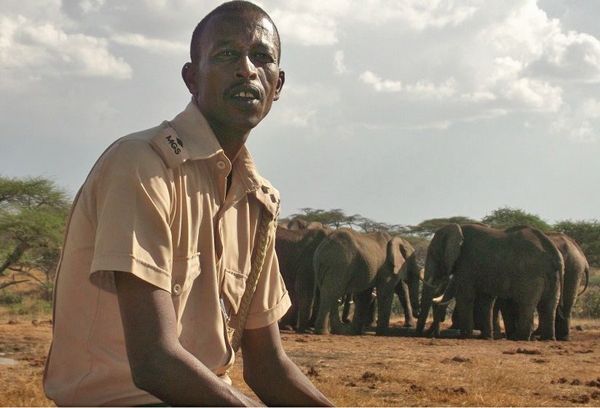 Each month, we will announce one ranger who through his outstanding achievements, has been selected as Ranger of the Month.

For the month of February, one achievement, one operation was quite clearly of a higher quality than all the others. This was the arrest of Pekei, the infamous poacher and alleged killer of Qumquat, her family and countless other elephants. Ignoring the failure of the Judiciary to reach a satisfactory conclusion, this operation was highly professional, difficult and high profile.

The entire operation was a co-ordinated effort between Big Life on both sides of the Kenya/Tanzania border, and a wide range of our resources, as well as our partners in KWS and the Tanzanian police. But the success of the operation is largely down to one man:
Francis Legei, Big Life Kenya’s Commanding Officer and Head Ranger.

Francis is a Laikipia Maasai who has worked in anti-poaching since his late teens, starting in KWS and moving into the private sector at a later stage. Since starting work for Big Life, he has proved to be completely trustworthy and reliable, someone who is passionately committed to wildlife and its conservation.

We had been tracking Pekei for weeks, ever since he skipped his court date and bail in early January. Several informers had been given the task of keeping us informed of his movements. Big Life’s cross- border capabilities proved to be highly useful, as we were able to use informers in both Kenya and Tanzania.

It was clear Pekei knew we were after him, and he kept moving, staying hidden all day and only appearing at night, often moving at those times when we couldn’t keep a tab on him. Efforts were made to waylay him, but none got close enough to even see him. Francis had been helping co-ordinate these efforts, but the decision was made that Francis needed to be on the ground after several such efforts failed.

Francis met with the informer who had the most up-to-date information, and started to formulate a plan. We had ascertained that Pekei had his own network of informers, who gave him warning of our approach, and he was always able to move before we were in place. It was clear we needed to try a different approach if we were to succeed. We had to set a trap.

From our informers, we had learned that Pekei also dealt in gems, nothing of real value, but enough to turn a profit.

Francis decided that this was his bait. An informer made contact with Pekei and let him know that he had some of these gems that he wanted to sell, and did Pekei want to buy them or arrange a sale? Pekei was interested, and they set up a meeting for Pekei to look at these gems.

Everything was in place, the ambush set up, and the informer on site ready to greet Pekei but... Pekei didn’t turn up. Something had warned him, but not enough for him to break off contact with the informer who was sill trying to set up a meeting.

Some compromises on our part had to be made. The meeting was to be held in a more difficult place to set up an ambush, at a different time of day for Pekei to feel more safe. This time Pekei, walked straight into the trap and it was over. Or so we thought..... to our huge frustration, the magistrate released him again for a new hearing on March 3.
BIG LIFE MERCHANDISE