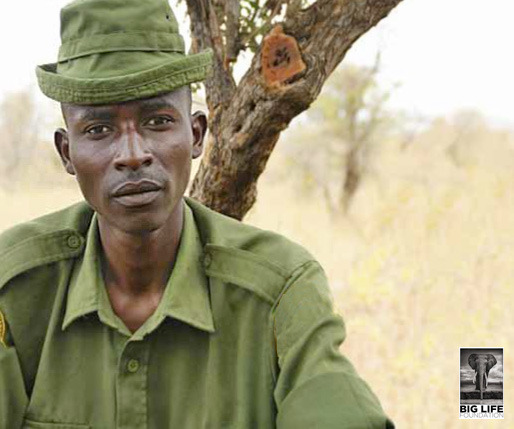 The sleeping rhino awoke and charged. She killed Justus’ father, while Justus watched from a nearby tree. At age 15, Justus became the man of the household and sole breadwinner for his mother, two brothers, a sister and his paternal grandparents.

Justus is a Wakamba, a tribe of hunters from the eastern border of the Chyulu National Park. Justus went to school when his family could afford it, and poached when they couldn’t. To begin with he went out to bring food back for his family and avoided the larger more dangerous animals. Frequently entering the park he gained a wealth of knowledge of the area and its wildlife.

His father was a rhino poacher, and Justus joined him on these trips until his death. What to do next? Justus knew the dangers of rhino poaching all too well. He also knew that the rhino population was low, and that feeding his family on income from poaching was going to be very difficult. It wasn’t the long-term solution he needed, so he set his sights on becoming a game ranger.

15 years later, Justus has dedicated his life to ensuring that the species that killed his father continues to survive in the northern Chyulu Hills. With no real education, he started as an informer for Big Life and the Kenya Wildlife Service, and after two years proved so valuable that Big Life employed him as a rhino watcher.

We knew that Justus was a find, but he really showed his mettle during the epic, weeks-long search for the snared rhino in March of last year. Some of you may have followed the tragic story: a rhino was snared but broke free of the anchor-point. The snare was cutting deeper into his neck, and it was a race against time to find him in near- impenetrable bush on razor sharp lava flows.

During the search, Justus worked almost every day for seven weeks straight, waking at 4-5 in the morning and patrolling or tracking until the mid afternoon. He was the first person to see the rhino and the only one to see it more than three times. On one occasion he tracked the rhino for four days straight; this is remarkable on normal ground,  but Justus did it over lava rock. The only days he missed during the search were when he travelled 200 kilometers to meet a witch doctor, who he hoped would help him find the rhino. Despite Justus’ efforts, we unfortunately ended up losing the rhino in that case.

But Justus has continued to excel, and his knowledge of his area has been invaluable. Justus has played a vital role in Big Life’s Rhino Identification Program, and it is for this that he wins the award of Ranger of the Month.

For a decade, we had little idea of the rhino population that were protecting, so elusive are these creatures. Many of the rangers protecting them have never even seen one! In order to improve our rhino monitoring, we have been using a combination of camera traps and track measurements to identify individuals, with the ability to then monitor them based only on tracks. Justus has shared his fantastic tracking knowledge with others and been instrumental in the success of this project. We have now identified all the rhinos on the western side of the rhino area, and all but two in the east.

Rhino poaching is escalating in Kenya, and the pressure is definitely on, but thanks to rangers like Justus, we are positive about the future of our local population.