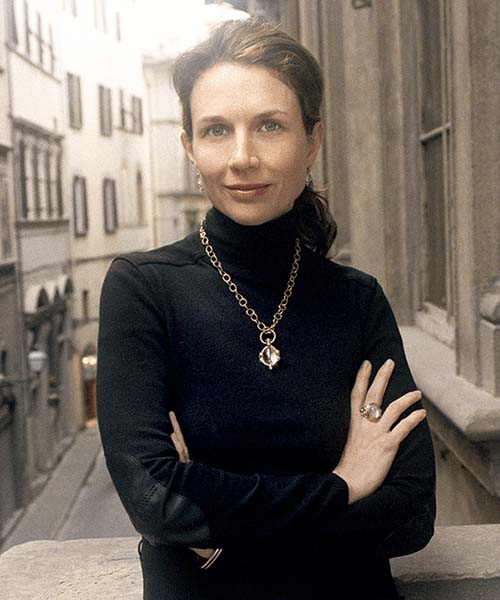 Born in Virginia, Temple grew up traveling and adventuring around the world—going on deep-sea expeditions with explorer Jean-Michel Cousteau, trekking through Mayan ruins in the Yucatán and studying literature in northern Italy, where she also discovered her professional calling. She founded her jewelry company in 1986 in Florence, Italy, beginning her collaboration with some of the world's finest artisans - the centuries-old Florentine goldsmiths' guild.

Temple received a B.A. in Italian Studies from Smith College and a M.A. in Italian Renaissance Literature from Middlebury College. She was awarded the Hall of Fame Award for design in 2011 by the Accessories Council. In 2016, Temple received the GEM Award for Jewelry Design, the industry's most prestigious honor. Publications on her work include “Alchemy, A Passion for Jewels” published by Harper Collins in 2008 and “The Golden Menagerie” published by Assouline in 2016. In 2017, Temple St. Clair joined Louis Comfort Tiffany and Alexander Calder as the third American jewelry designer whose work is represented in the permanent collection of the Museum of Decorative Arts at the Louvre in Paris.

Temple St. Clair is excited to join the Board of Directors at Big Life Foundation as she always had a deep love for nature, saying, “We’re currently in what’s called ‘the 6th great extinction.’ We’re losing creatures at an accelerated rate—we’re losing daily… It’s just unacceptable.”