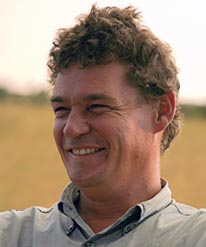 Born in Kenya in 1964, Peter Silvester is a second-generation Kenyan who has spent his life on the African Continent. His professional safari career began after working as a guide for a number of various companies. After three years, on what was essentially the circuit in Kenya and Northern Tanzania, he decided to leave the tourism industry and spend two and a half years with George Adamson and Tony Fitzjohn at their Lion and Leopard Rehabilitation Project at Kora in northeastern Kenya.

In 1984, Peter began working with Four By Four Safaris, which became the original Safari unit of today’s Royal African Safaris. He has been operating and guiding personalized safaris ever since. His public career has included serving on the Executive Committee of the Kenya Association of Tour Operators, the founding Chairman of the Kenya Professional Safari Guides Association, and a Trustee of the George Adamson Wildlife Preservation Trust.

Peter is a passionate conservationist who is delighted to join in Big Life’s mission to protect the Greater Amboseli ecosystem.