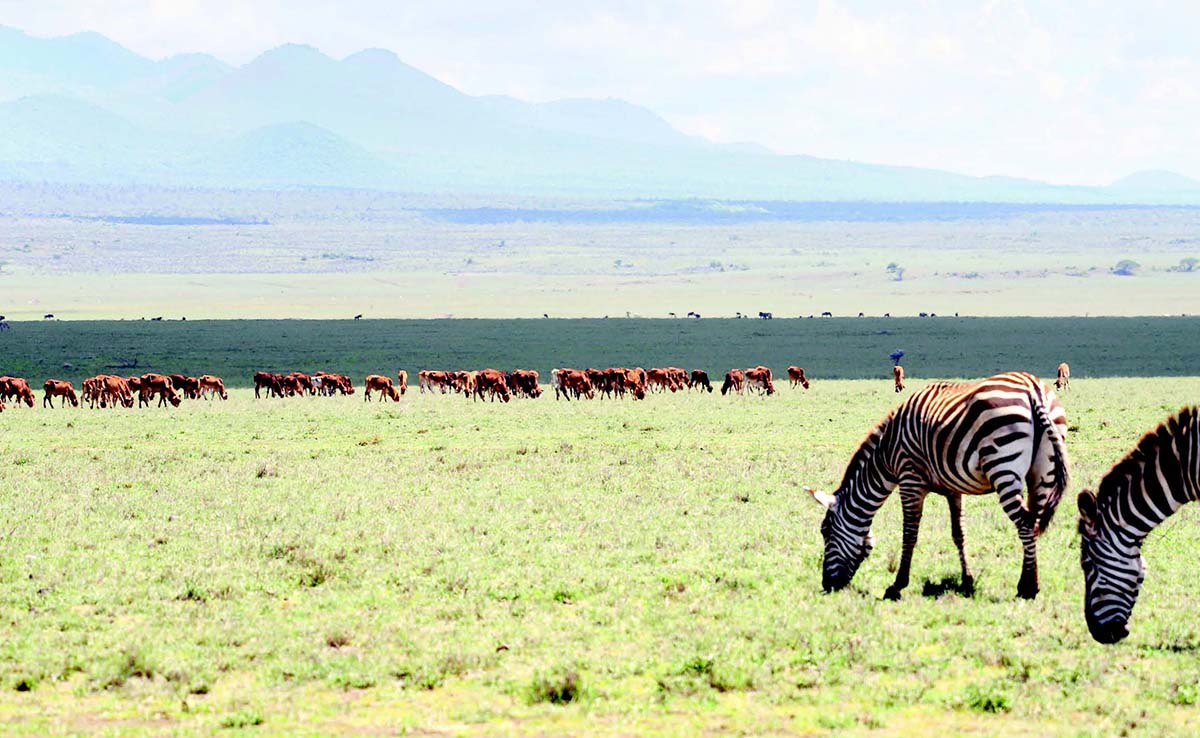 Article and photos by Andrew Kasuku - The Star Kenya

Eselengeni in Kajiado South is one of the dispersal areas for wildlife in Amboseli park and grazing fields for the community’s livestock. But it has an unlikely development— parcels of land secured by chainlink and strong posts. The fenced parcels stand out in the wild and remind one of the way ringworm parasite invades one’s skin, forming irritating patches.

David Salash, 62, says growing up the area was green and covered with virgin forest. Grazing family cattle was fulfilling, he says, unlike today. “We will lose all trees if nothing is done,” he says during an interview under a tree at a camp for rangers from Big Life Foundation, a conservation NGO working in the Amboseli ecosystem.

Nearby, a developer who bought a piece of land from a local is putting up a fence and digging a trench around it to keep off cattle, wildlife and locals. There are three such fenced parcels of land in the vicinity. One has a borehole and watermelon plants.

Joseph Kotoke, a Big Life Foundation ranger platoon commander, says 10 giraffes have been entangled and killed by the fence under construction. He says there are 50 fenced plots in the area, which is under Eselengei Group Ranch. More than 40 giraffes have been trapped in the fence wires and died, Kotoke says. “Because these plots don’t have electric fences, animals get trapped in the wires of the fence and die while trying to free themselves,” he says. Kotoke says most of the fenced plots are in animal corridors. Wildlife matters because it is the backbone of safari tourism, one of the two economic mainstays here, along with livestock. Both wildlife and livestock need to thrive if the local people are to earn a living.

Fragmenting the land for crop farming in the arid environment jeopardises locals’ livelihoods, especially as the effects of climate change worsen. Already, people are feeling the effects.

With a child strapped on her back, a woman and five children push water jerrycans with their legs across the dried-up Eselengeni riverbed and past the newly fenced plot. The river dried after successive failed rain seasons and now residents depend on borehole water for use at home and their livestock.

Kotoke says if all plot owners dig boreholes for water-intensive agricultural projects, the water level will eventually go down and the springs that wildlife and cattle depend on will dry. To limit the damage, local leaders are zoning the area and working with the Kajiado government and land authorities in Nairobi to gazette land use plans that dictate what each zone can be used for. The goal is to keep settlements and farming in areas where the environment can sustain it, and keep herding and wildlife areas open so they, too, can thrive. “The rate at which Eselengei group ranch is being sold is very high and at a throwaway price. We are coming up with strict measures with the stakeholders to control land subdivision and sale,” Kotoke says.

Buyers will now require approvals from relevant government agencies before they develop their land, he adds. The wave of privatisation, land fragmentation and land selling is forcing pastoralists outside the area to look for pasture, exposing them to a threat of diseases in new environments. David Kitasho, a pastoralist, says without interventions, the future of the 17,400-kilometre square ranch is in jeopardy. He says what’s happening is akin to selling wealth and buying poverty.

THREATS TO ECOSYSTEM
The challenge represents what’s happening in other parts of the larger Amboseli Ecosystem. Last year, an attempt by an agricultural company, KiliAvo FreshLtd, to set up an avocado farm on an elephant corridor on the outskirts of Amboseli National Park was thwarted by the Environment court. The clearing and fencing of 180 acres in Kimana caused an outcry from conservationists, which culminated in a legal battle between the National Environmental Management Authority and the farm that ended in favour of Nema. While the firm stopped the planned activities, the land is still fenced.

Samuel Kaanki, chairman of six conservancies under the umbrella body of Amboseli Land Owners Conservancies Association, says irrigation of the farm would in the end dry water sources that are used by farmers, herders, townspeople and wildlife downstream. Rivers found in the Amboseli area include Sineti, Kimana and Engumi.

Kaanki says water levels in these rivers have gone down by 50 per cent while smaller rivers and springs have dried up as a result of irrigation by other large farms in the conservancies. He says landowners thirsty for money sell land to individuals, mostly non-locals, who then implement development ideas that are against existing local land management plans that direct how each area of land must be used.

County officials have cautioned unscrupulous sellers and buyers, warning that land use plans are legally enforceable and greater scrutiny of how new owners are using their land is coming. Kaanki says land subdivision went wrong in the hands of rogue officials of Kimana Tikondo Group Ranch before the land was converted into existing conservancies. The officials, he says, wanted riches for themselves and turned from protectors of the land into brokers, bringing in tycoons who hoodwinked landowners and shortchanged them.

“When we finally put up management plans, those who wanted to buy land here saw there was no need as they won’t be able to use it just as they wish…now it’s not easy to get someone to buy land here,” Kaanki says.

“We are not fighting with the landowner, it’s the buyer. Just buy the land, but know that this is the plan, and it is official. If you buy, the plan will show you where you will build, graze, but other plans, no.”

He says if KiliAvo was to go on, it would completely block a corridor critical for the dispersal and migration of elephants. And if other firms had followed suit, it would have greatly limited grazing land for the Maasai. Kaanki is also a member of the Amboseli Ecosystem Trust Board and chairman of Conservancies Forum, a body that brings together 22 conservancies in the Amboseli ecosystem. “Amboseli park being just 392 kilometre square is small and the animals can’t live there. They use it for water and move out into surrounding conservancies for pasture, so if the dispersal areas are depleted, there is no park,” he says.

At the nearby Mbirikani Group Ranch, which has also just been subdivided, things are far better.

There, the management plan was drawn up in consultation with the ranch community, and areas set aside for settlement, farming, herding, and leasing for tourism. Already, the rules are being enforced and anyone wanting to sell their plot is aware they must let the buyer know the permitted land use. A large chunk of the ranch has been set aside as a common grazing zone for community cattle and it is under a single title deed. This means no part of it can be hived and sold off. As the interview takes place, the area is teeming with livestock as the rains have started falling and vegetation is growing. 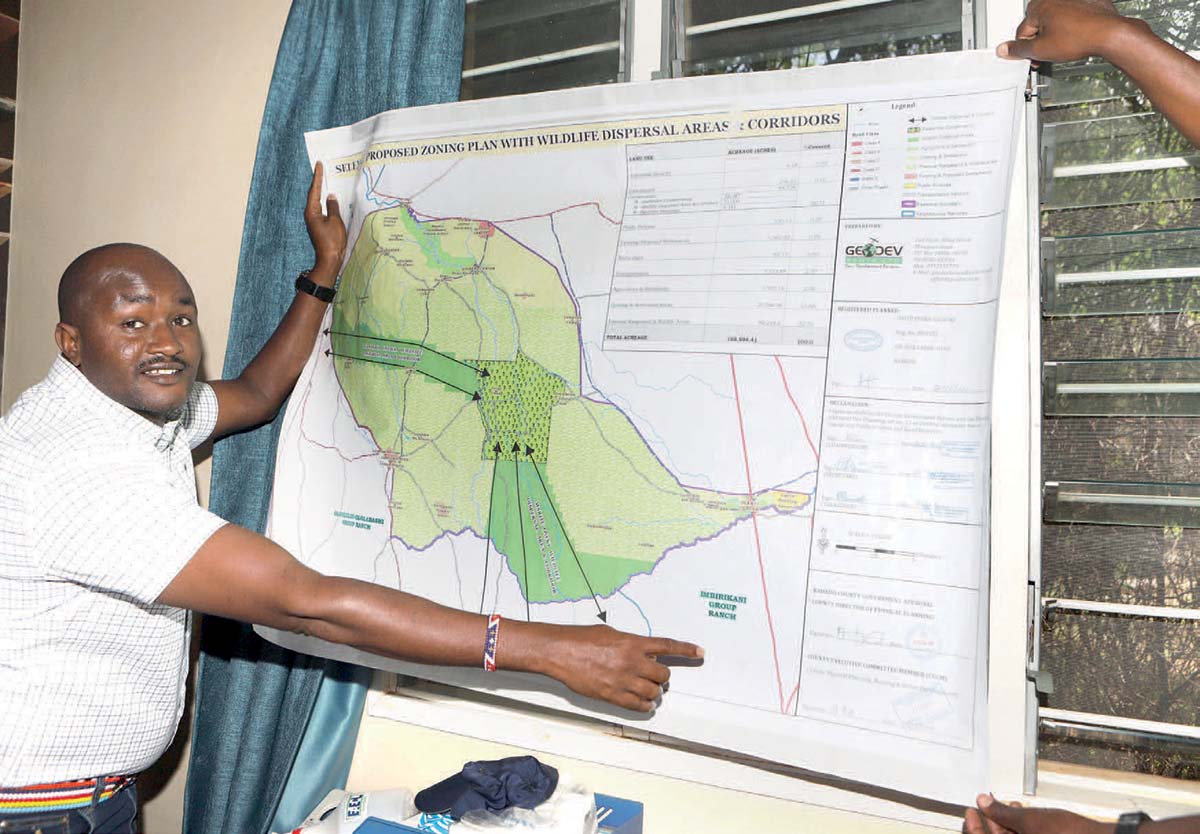 Big Life Foundation CEO Benson Leyian says areas around the Amboseli ecosystem are semi-arid, with short rain seasons, hence, suitable for pastoralism and wildlife tourism than farming. “We are not against subdivision and owning land. We are saying that with this kind of inappropriate land use and in the backdrop of climate change, will it sustain livelihoods within Amboseli? The answer is no,”he says. Leyian says Big Life has helped the community realise their need and helped them zone their land.

“They set aside land for animals corridors, for movement of animals and wildlife, settlement and farming... we are also cognisant in the backdrop of shaky climate, people need to have an alternative, but that does not mean a total replacement of our culture,” he says.

“If you continue to subdivide the land, and to shrink the sizes and block the corridors it only means climate change will hit livestock and wildlife harder and therefore hit the economy.”

Big Life works with group ranches and communities in Eselengei, Kimana, Rombo and Mbirikani to support their management and land use plans, including helping set up animal corridors and providing rangers to secure conservation areas. It also works with tourism operators to ensure they pay leases to local people to use their land for safaris or to open lodges.

Leyian says growing populations and expanding town centres in the ecosystem mean without proper planning, land meant for wildlife and cattle would in the long run be swallowed up. The organisation has set up a wildlife corridor that joins Amboseli National Park, Chyullu Hills National Reserve and Tsavo National Park. The Kimana corridor helps wildlife cross from Amboseli Park during drought to the protected Kimana Sanctuary. Hundreds of livestock and wildlife died in Kajiado during the recent drought, said to be the worst in decades. Experts say land use planning is essential for land productivity, more so in an era when changing climate is having adverse effects on communities.

Stephen Moiko, a social scientist and specialist in land and natural resource governance, says land use planning helps communities plan utilisation of resources and thrive using scarce resources in rangelands and in arid and semi-arid areas that are traditionally difficult areas to live in.

Moiko says subdivision and privatisation of communal resources such as land risks creating enclosures that hinder the mobility of wildlife and livestock, and individualises critical resources needed by many people. This in turn introduces vulnerability into rangeland ecosystem, making communities more vulnerable and prone to the impacts of climate change.

“In the period of climate change, more than ever land use practices, including land use planning and good well-thought-out policies informed by modern science are very much needed,” he says.