Mourning the Loss of a Great Elephant: Torn Ear

A beloved, venerable African elephant named Torn Ear was killed in Kenya on February 7 by poachers who shot him with poisoned arrows.

Bonham is the co-founder and the African operations director of the wildlife conservation organization, Big Life Foundation. He noticed that the elephant was walking with an irregular gait, and then he saw two wounds behind Torn Ear’s rib cage.

A veterinarian was summoned, and Torn Ear was darted with a tranquilizing drug. It was clear upon examination, Bonham said, that “the arrows had penetrated into the abdominal cavity, and peritonitis had set in, which meant that there was no hope for survival.” So Torn Ear was euthanized.

In a blog post the next day Bonham wrote: “Yesterday we lost an iconic elephant, one of the few left on the continent whose tusks pass the 100 pound mark. I also think of him as a friend of 20 years. Emotions are running deep, as we failed in our mission to protect him. But the greatest sadness is the reality that Torn Ear was probably one of a hundred or so elephant that died just yesterday to feed the ivory trade.”

Please talk to me about Torn Ear, whom you’d known for so long. What was his significance to you?

I first saw Torn Ear on the edge of the Chyulu Hills halfway between Tsavo and Amboseli. Obviously, with his distinctive tear in his left ear he was always easy to recognize. [Elephants often tear parts of their ears off on bushes and trees, but Torn Ear had lost more than most.]

He then started coming to the Ol Donyo Lodge waterhole about ten years later and became one of our resident bulls. From day one he had a very mellow temperament and was easy to approach, so we were always able to get up close and get to know him. I watched his ivory grow, probably nearly doubling in size from when I first saw him.

We weighed his ivory [after he died], and one tusk just topped the 100 pound mark, which is unique in elephants today and made him stand apart and probably was the reason for his death. 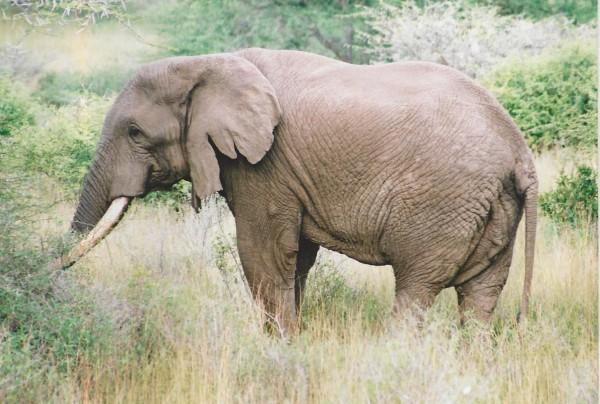 Torn Ear died from a poisoned arrow. How common is this way of killing elephants?

Every area is different. Most poaching today tends to be done with rifles, but in the Tsavo area where the Wakamba tribe is predominant, we see a lot of bow and arrow hunters since traditionally they have always been very adept and efficient hunter-gatherers.

A well-placed arrow with good poison can be deadly, killing in 20 minutes. But if the arrow is not well placed…i.e., not into the stomach, or the poison is stale or badly made, it doesn’t necessary kill, and the elephant can survive. However, more often than not, the elephant will die a lingering death through infection. Sometimes this can take up to a month. This method is also popular as there is no gun “shot,” which is always a give away to game rangers/law enforcement/informers, etc.

Have you noticed any response by any other elephants to Torn Ear’s death?

Yes. We put a camera trap on his carcass and have pictures of other bull elephants he used to move around with, coming to mourn him and touch him with their trunks. 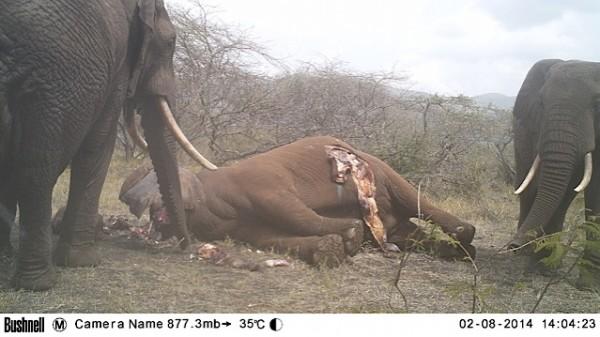 Big Life Foundation was started by photographer Nick Brandt and yourself—with conservationist Damien Bell quickly on board—back in 2010. How did you most want to distinguish your work from other wildlife conservation organizations?

Every wildlife area has its own recipe in terms of wildlife protection. There are so many variances that dictate this. For example, is it a protected area? Is it community land? What is the habitat: Is it forested; is it open? Who are the tribes who live in it or around it? How close is it to main roads, towns, villages, and so on?

Big Life is currently working in community areas and in areas bordering national parks. The obvious approach has always been to include and partner with the communities concerned. Get them on side by partnering and providing wildlife-based benefits, employment, and education. This approach gives them a tangible sense of ownership, which obviously leads to success.

On Big Life’s website Nick Brandt wrote,“many NGO’s don’t actually have key leaders on the ground in far-flung project areas coordinating, supervising, overseeing the projects. They try and run their various projects from a desk in Nairobi, or worse, from London or New York or Washington.” Do you think the majority of NGOs are disconnected and failing in the fight against poaching— and if so, what’s the cause of this failure?

I think what makes an important difference is when a project leader is on the ground, living and working with the local communities and wildlife and other government officials. Living here as I’ve done for 20 years, I’m able to better efficiently and effectively coordinate and communicate with all relevant parties. I like to think of Big Life as being a grassroots operation linked closely with the community whom we work with and certainly committed to the long term.

There are a lot of NGOs who are doing exceptional and admirable work, and, yes, there are others who in my opinion pour money down the drain. There are NGOs who have a policy of not employing rangers and scouts, as it means that once they’re employed, they’re committed to a long-term investment. Big Life has been criticized for investing so heavily in employing rangers, [with NGOs] saying it is not sustainable. Conservation is not short term. You have to be in it for long haul. I’ve seen too many big NGOs come and go on their hyped two- or three-year programs—and walk away leaving very little behind them.

Then of course there are others who spend most of their budgets on marketing and fundraising with very little reaching the field. There is a program I know of that from a budget of 13 million dollars, only three million reaches the field.

Some NGOs based in Washington and New York will proclaim that they are the experts in their field. These NGOs are often led by individuals who may have had only a few years actually working in the field. But because they are a big name, with a “Dr.” in front, they think they have all the answers. Maybe on paper it looks good, but in implementing and activating [their work] they have no idea of the reality. 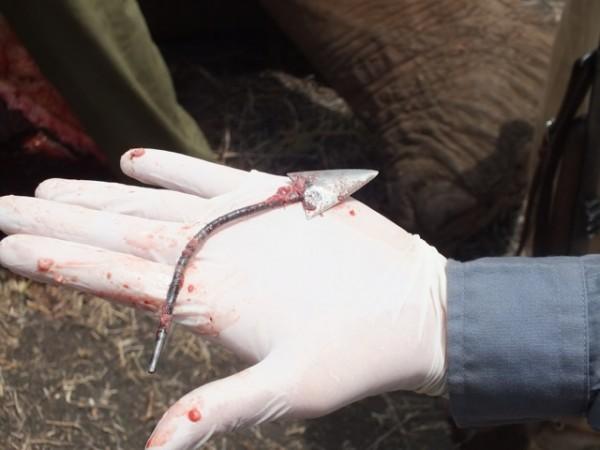 What has been Big Life’s most obvious success?

There is no question that in the areas Big Life operate, the numbers of wildlife killed for the bush meat trade are much reduced compared to pre-Big Life and other areas. We’re seeing numbers bouncing back. The same applies for elephants. Last year we lost five elephants to poaching in a population we protect that probably pushes over 2,000. That has to show we’re doing something right.

We operate a compensation scheme for livestock killed by predators. It’s difficult to quote specific numbers, as we did not know the exact amount before the program, but in one area we’ve turned one lion population from maybe five or six to 50.

Do you anticipate that Big Life’s model will be duplicated in any other countries or regions?

I believe we have the recipe for a hands-on and successful approach to wildlife protection. We have the support of the people that live with wildlife, which is the most important ingredient. In terms of being duplicated, this has been recognized even in the new Kenya Wildlife Act, whereby devolution of wildlife management to those who live with them is recognized.

I want to for a moment turn to Emmanuel de Merode, who is Chief Warden of Virunga National Park. De Merode consistently speaks highly of Virunga’s park rangers. Big Life also appears to elevate the importance of rangers.  Can you talk to me about that?

I’m a huge admirer of what Emmanuel has achieved. His achievements and those of his rangers speak for themselves. It’s all about commitment; it’s not just a job. When we lose an animal here, the rangers take it personally. You can train [the rangers], pay big salaries, make available all types of high tech equipment. But if the rangers are not personally involved, you’re wasting your time. 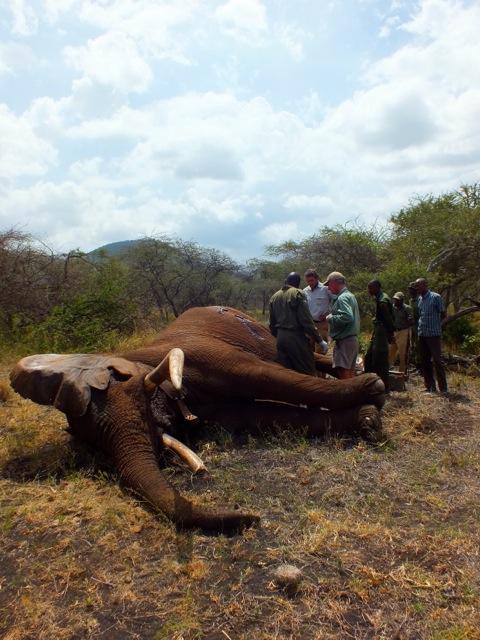 Kenya recently created the Kenya Wildlife Act, which ushers in far more robust laws pertaining to wildlife crimes. What are some of the act’s highlights?

We’ve been waiting a long time for the legislation to support meaningful penalties for wildlife crime. The new act certainly has this component but needs to be tuned and taken seriously by the magistrates concerned with its implementation. We’re currently dealing with a case where a magistrate does not seem to recognize the seriousness that the government has attached to the new act. [See Big Life’s blog post about Pekei, the suspected killer of the leading elephant matriarch, Qumquat.]

How would you rate the response by CITES to the poaching crisis?

I don’t even rate them. They’ve failed completely. One of the reasons we’re facing the current debacle is the disastrous decision they made to sanction the one-off sale of ivory.

How would you assess generally the international community’s response to the poaching?

Just turn the clock back one year and compare the awareness of world leaders to that of today. What’s just taken place in London says it all: We have royals and leaders of state convening to highlight and find urgent solutions to stop the holocaust that wildlife is currently facing.

What is your assessment of employing a military force to combat poaching?

Bringing the military in is a double-edged sword. Maybe there are cases where it is justified, but it’s certainly not a long-term solution. It’s not a war that can be won with guns and boots on the ground. We have to address and kill the market and generate goodwill towards wildlife from those who live with them.

Do you often work with a general anticipation that the elephants you care about will most likely die?

I live with that every day. I see individuals I identify with and see herds I know nothing about and always wonder if I’ll ever see them again. And if I do see them again, maybe it will be in the form of a rotting carcass.

How does this poaching wave compare to that of the 70s and 80s?

I remember the 70s and 80s poaching wave only too clearly and never thought it could get worse. What we’re seeing now puts it in the shade.