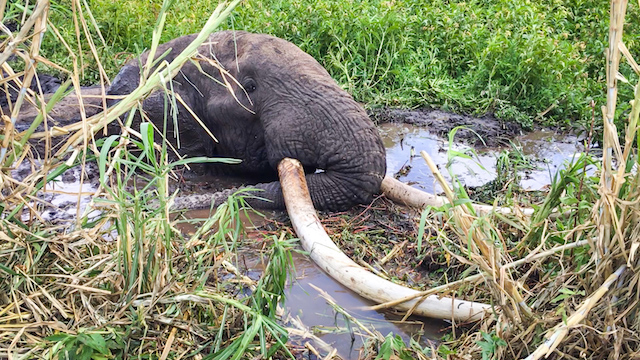 A year ago this week, one of the Greater Amboseli ecosystem’s most iconic tuskers, Tim, managed to get himself thoroughly stuck in the mud. What could have been an unbearable tragedy instead became a remarkable success story, due to the cooperation of so many partners refusing to give up on the old bull.

It took an entire day, a 300 m reinforced tow strap, a tractor, two Land Cruisers, Big Life’s rangers, our partners at the Kenya Wildlife Service and Sheldrick Wildlife Trust, and help from the local community to rescue him. The tow strap snapped and was repaired five times, and the 6-ton animal had to be dragged 25 m before he reached mud shallow enough to stand. But finally, in the twilight hours, he rose, slowly, and made his way towards the Kimana Sanctuary, where he could recover in safety under the watchful eye of Big Life’s 23 stationed Kimana rangers.

Today, Tim is alive and well and Big Life’s rangers continue to keep close tabs on him. And we know as well that in the last year he went into musth – hopefully passing on his incredible genes. Tim is in his fifties now, but we are doing everything we can so that the world can have many more years with him.