THREADING ELEPHANTS THROUGH THE EYE OF A NEEDLE 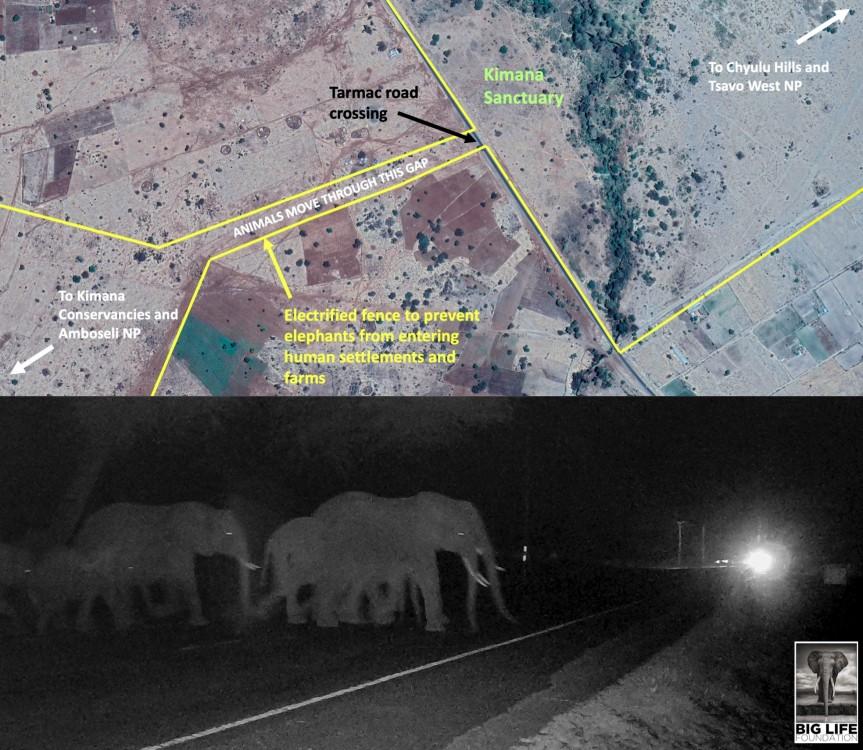 We were heading into the unknown. We’d known the critical moment was inevitable since Big Life had started construction of electric crop-protection fences in the Amboseli ecosystem more than two years ago, to reduce the sometimes deadly conflict between farmers and elephants.

Animals that migrate out of Amboseli National Park frequently head east and into a series of conservancies that form a migratory passage known as the Kimana Corridor. They traverse this protected space to reach the Kimana Sanctuary some 15 km away, from where they are able to move onward to Chyulu and Tsavo National Parks.

At its narrowest point the corridor is only 250 feet wide, with human development on both sides and a tarmac road to cross before reaching safety in the Kimana Sanctuary. This pinch point is known as “Kimana Crossing,” and has been causing us a bit of heartburn, but a carefully engineered plan was developed to mitigate the impact on wildlife.

To start, we filed our plan and received approval from the Road Authority. From there, we constructed a series of speed bumps to slow the traffic approaching the crossing. As the fence crosses the road, the wire is elevated to permit cars and box trucks to pass underneath. To prevent animals from simply walking out the way the cars are driving, long dangling electrified wires are suspended that stop animals but not cars. When all was finally in place, the power was turned on, and the Kimana Crossing was live.

From there it was a tense wait. We had no idea how the elephants would react: would they use it? Was it going to be chaos funneling them through a narrow and potentially stressful gap?

We should never have underestimated these intelligent creatures. Within a day of the crossing’s completion in late 2018, the elephants had already worked out what they were supposed to do, and the first herd used it in broad daylight with young calves in tow. Since that moment, there has been steady use of the crossing by a variety of species on a daily basis, and our camera traps have even captured rarer species, such as lion and aardvark, using it to cross back and forth between the Kimana Sanctuary and the Kimana conservancy areas.

Amboseli is changing rapidly, and we are trying to look ahead and imagine what it may look like decades from now. One thing is almost certain, and that is the days of unrestricted movement will be over. Animals will need to weave their way through the human-developed areas across the landscape, threading their way from one block of natural habitat to the next. We will be working to ensure that they can make these journeys safely.

Thank you as always for your support of these efforts.