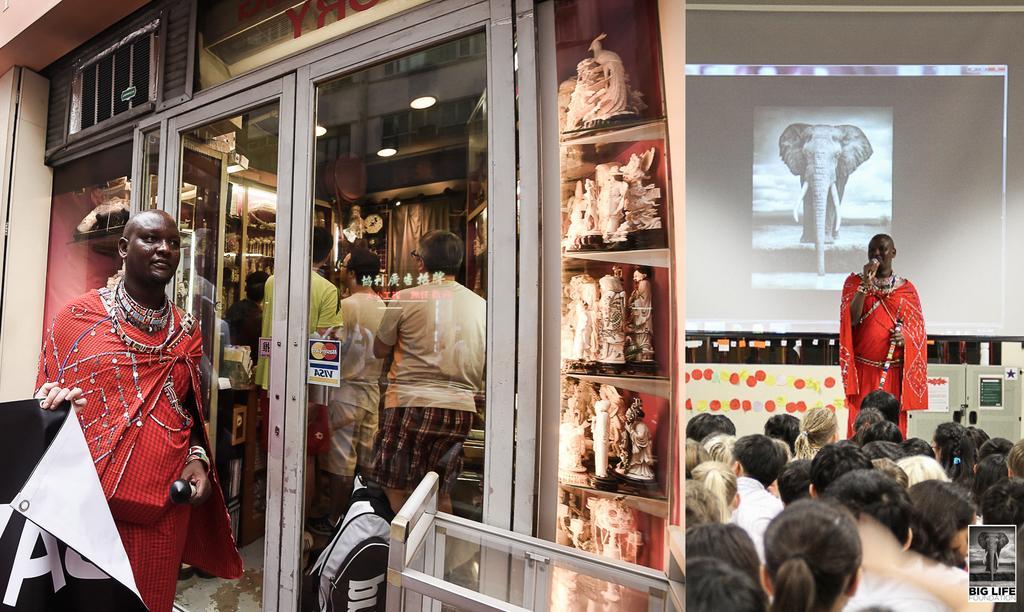 “Do you wear underpants beneath your Maasai dress?”

An awkward start to a Q&A session, but one of the more humorous questions that Daniel ole Sambu, a Maasai tribesman and Big Life staff member, received from one of the 2600 school children he addressed during a recent trip to Hong Kong and Singapore.

But there were far more heart-wrenching questions than humorous ones, says Sambu. Many of the children were still under the impression that elephant tusks were simply “collected in the forest,” and no matter how gently Sambu conveyed his message of how tusks are actually obtained, many of the children had tears in their eyes.

Sambu’s visit was organised by The Elephant Society. “It was the trip of a lifetime,” he says, “but also a call of duty for me. I wanted to do the best that I could to represent the rangers and local Maasai community who are working so hard to conserve wildlife.”

While in Hong Kong, Sambu joined Project C:Change in a march through the streets to demonstrate against the ivory trade, which is still legal in the city. Confronted with rows of ivory shops and consumers negotiating inside for the best price, Sambu was shocked. “We see these things in documentaries and we didn’t believe it, but I was there and saw it with my own eyes. It is so bad.”

Thankfully, these eye-openers were balanced by moving acts of support. After one school talk, a young boy walked up to Sambu and gave him $4, telling him that this was his donation and that he would do more fundraising to support Big Life. That $4 can buy two days of field rations for a Big Life ranger.

At a policy level, there also seems to be positive change in Hong Kong. Lawmakers from the Hong Kong Legislative Council unanimously passed a motion on December 3, 2015 calling for the Hong Kong government to legislate for a commercial ban on ivory trading. Although non-binding, this high-level pressure is unprecedented in Hong Kong.

It seems that things are changing for the better, however slowly. In the meantime, Big Life will continue our work here in East Africa to make sure that as many elephants as possible will survive the poaching crisis.