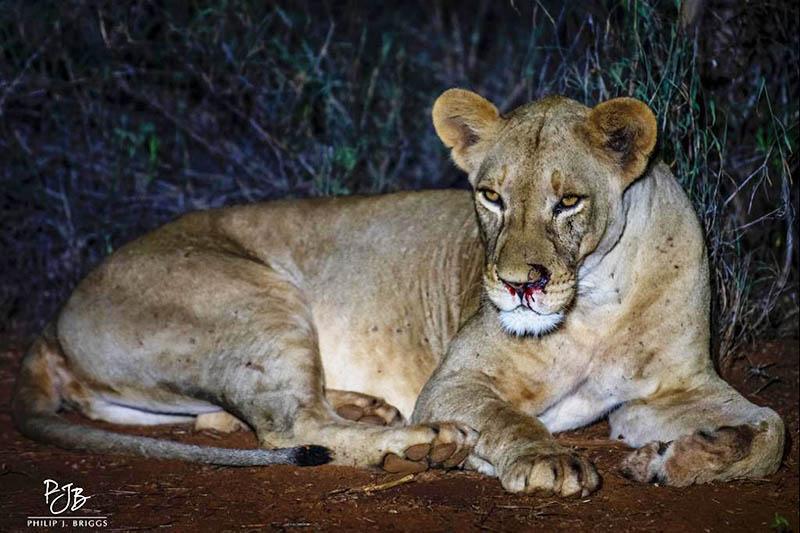 A spear in a lion is never good news. The initial reports were that the blade had lodged in her skull, but the lioness had disappeared.

The day had started normally enough, with the Maasai warrior herding his cows out into the bush in search of pasture. What he didn’t know was that he was on a collision course with an age-old adversary.

The lioness attacked unexpectedly in broad daylight. Desperate to save the life of one of his valuable cows, the herder reacted in the only way he knew how. He aimed his spear at the lioness, and threw. It hit her in the face and she ran.

In the past, all nearby warriors would have assembled and gone after the lions to make sure that the threat had been eliminated. But instead, in a remarkable demonstration of the success of local lion conservation efforts, the livestock owner called for help: not from the warriors, but from a group of conservation partners.

Big Life rangers, Lion Guardians, and Olgulului rangers all reacted swiftly and set off in search of the injured lioness. Eventually, the tracks led them to the lioness, and with relief, the tracking team could see that the impact had not been fatal. Her nose was cut and bleeding from where the spear had hit her, but this was one lucky lion.

The Lion Guardians identified her as Nawashie, a five and a half-year old lioness from a small pride of five lions. Their team tracked her the following day, confirming that she would recover from the wound on her own.

This situation demonstrates the complexity of trying to achieve some sort of harmony between man and animal. This herder was simply defending his livestock, and no-one can fault his reaction. Had the cow been killed by the lioness, Big Life would have compensated the owner a portion of its value, provided that no lions were killed in follow-up hunting attempts.

Despite the number of livestock killed by predators on a daily basis across the ecosystem, this compensation program in concert with the efforts of our lion-conservation partners has helped create an environment where spears are thrown at lions almost exclusively in self-defense. At a time when the world needs some good news about lion conservation, this is certainly a glimmer of hope.