DEADLY TOOLS OF A POACHERS' TRADE 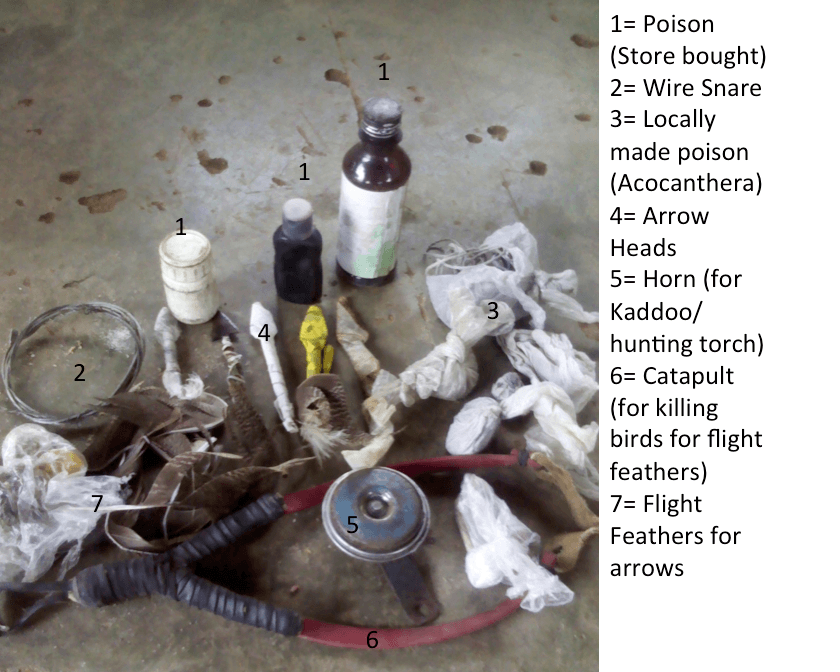 Man is certainly an ingenious beast, but when it comes to developing new ways to kill he seems to excel himself…

This was confirmed again last week when the Big Life Rapid Deployment Unit, acting on a tip-off, raided the homestead of a known poacher on the border of Chyulu Hills National Park, and unearthed this lethal treasure trove of poachers' tools.

What jumps out at me is the mix of new and old methods, all aimed at targeting elephants, rhino and the animals from giraffes to zebras to gazelle that make up the thriving bushmeat trade.

On one hand, there are the traditional arrow poisons, thousands of years old. Then the new agricultural poisons, available over the counter, to lace not only arrow heads, but also tempting melons put on the trails used by elephant and rhino.

This poacher and his tools are now out of circulation. But right now, there are other lairs out there - hideouts where poachers are preparing for their deadly work. Real success is catching these people before they kill, and no-one is better placed to do this than the Big Life rangers from within these communities.

If you would like to directly support the work of the Big Life rangers, please consider joining the Big Life Ranger Club at www.biglife.org/big-life-ranger-club