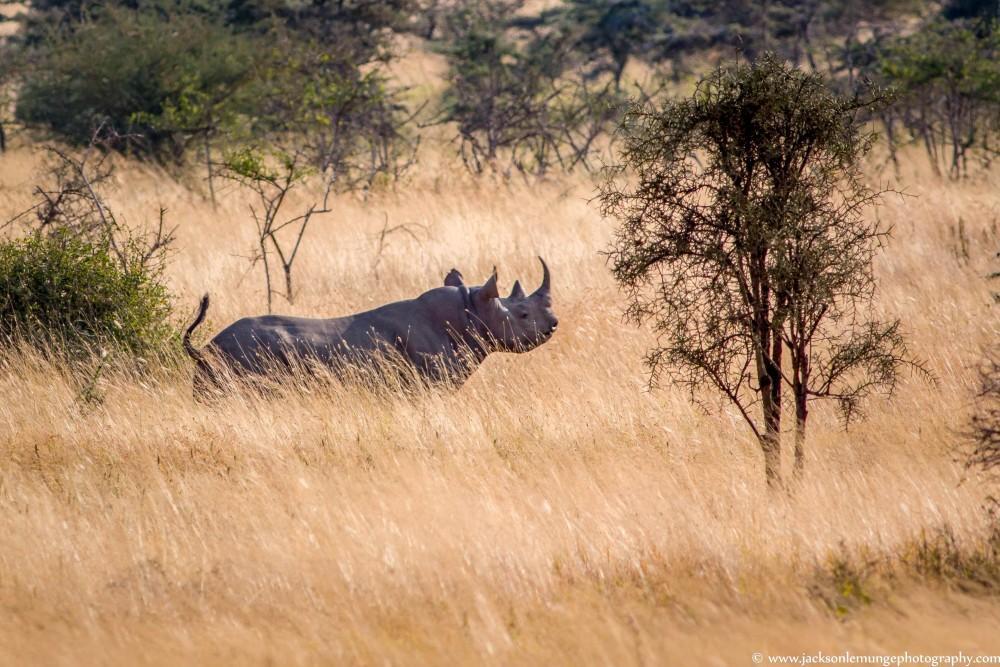 Wildlife tracks are a bit like long pieces of spaghetti; it’s not often that you follow them to a neat and satisfactory ending. So, when a dawn ranger patrol found rhino imprints that seemed to belong to a mother and calf, they could not predict where they would lead, if anywhere.

Regardless, this was an exciting discovery. The Eastern black rhinoceros is the most critically endangered of the black rhino subspecies, and was thought to be extinct in the Chyulu Hills until they were rediscovered in the 1990s by one of Big Life’s first rangers. A small population had been there all along, hiding deep in the lava fields and thick vegetation far east of the Amboseli ecosystem.

That population now comprises eight individuals, including the new calf, each of which is extremely special as a member of an original wild population, not bred under human management. To see a rhino is an extreme privilege, and very rare.

The tracks got fresher as the rangers followed. They slowed, not wanting to startle the animals, or elicit a dangerous charge from the mother. Excitement eventually turned to elation when they spotted two dark shapes in the bush ahead.

Better still, the two rhinos were relaxed enough that local lodge guests had enough time to get out to see them, becoming the first tourists to photograph a rhino in decades here in the Chyulus. We hope that this is the first of many such sightings!

Protecting these rhinos is no small job. There are 51 Big Life rangers based in 7 rhino-specific outposts coordinating with 24 Kenya Wildlife Service rangers who are all committed to keeping the rhinos safe. We’re grateful to all of our partners who help and support us in this, including: Kenya Wildlife Service, Save the Rhino International, Chester Zoo, US Fish and Wildlife, Tusk, and Great Plains Conservation.