BORN TO BE BIG 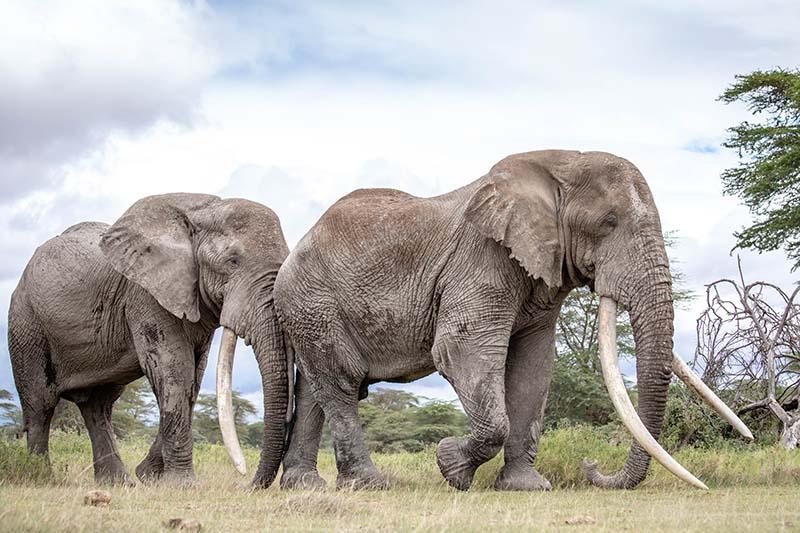 Being big is good for attracting mates. It can also get you killed.

Tim and Tolstoy had no say in the matter. They both inherited a genetic trait that has helped them to the top of the male elephant hierarchy in Amboseli. It has also put their lives in continual danger.

Thanks to Amboseli Trust for Elephants, we can track their genealogy back to a female elephant called Teresia, Tolstoy’s mother, and Tim’s grandmother. Females will have an average of seven offspring over a 35-40 year period, leading to complicated family trees. So although Tolstoy is technically Tim’s uncle, Tim is actually two years older and turns 50 this year. Growing up together, the two formed an early bond that is still strong as ever, and they are rarely separated.

Sadly, Tim and Tolstoy are some of the last of their kind. Their huge tusks, once common across Africa, are now so rare that they are living treasures. In Kenya, thankfully, trophy hunters can’t kill them, but poachers targeting those same trophies disregard the law. Elsewhere in Africa, poaching and trophy hunting have both selectively eliminated older and larger-tusked elephants like these from the gene pool over time.

This is a problem for the conservation of the species. The older bulls have rich life experience and, being very socially connected, are an important source of information for other elephants. They mentor the younger bulls and control any wayward or anti-social behaviors. And critically, big old bulls pass on the genes that will code for large tusks in future generations. As Tim and Tolstoy are now in their reproductive prime, they are arguably more important now than ever.

They need protection, so we provide it. Big Life’s rangers patrol daily to protect them from poachers. But these large animals also need space to live. With support from the Sheldrick Wildlife Trust, Big Life partners with local communities to lease some of the areas that are particularly important to Tim, Tolstoy, and the broader Amboseli elephant population, including the Kimana Conservancies and Kimana Sanctuary.

Tim and Tolstoy are notorious crop-raiders, so we are also continuing to construct crop-protection fences to keep elephants out of agricultural areas where they are at risk of being speared by angry farmers. Tim and Tolstoy have already been speared at least four times between them and are running out of luck. We must finish the fences before a blade finds its deadly mark.

Of all the things that might kill these special elephants, the only one we’ll accept is old age. And with your help, we plan to continue doing everything within our power to ensure that this will be the case.