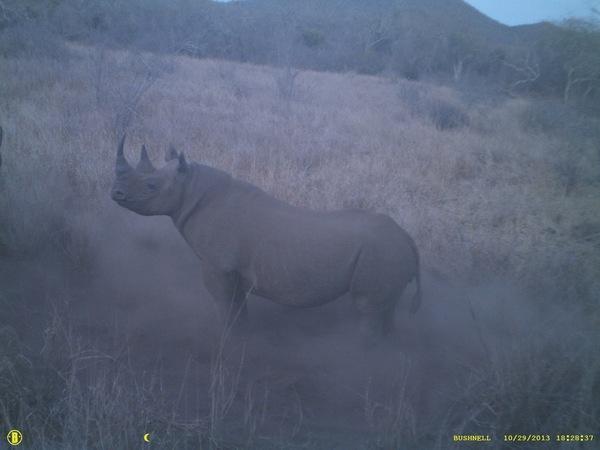 Cathy, one of the rhinos in the Big-Life patrolled Chyulu Hills of Kenya, caught by one of the Big Life camera traps in October

The concept of Christmas is a rather new development here in Africa, and especially among the Maasai, who have resisted cultural change for a long time. To the 19th century Europeans, they were the “noblest of savages”, an elite corps of painted warriors, for whom nothing was an inducement to change. Neither peace for war, nor money for cattle, nor cities and settlement for the plains and open boundaries of their land. This isolation, their land, their traditions, codes and values have all been defended in a long and mostly passive war of resistance, carried out by a community structured as a standing army.

The present day standing army is the Big Life Foundation Rhino rangers, 95% of whom are local Maasai recruited from the local community, and famed for their intimate knowledge of the lay of the land and for bushcraft skills.  All these have come in very useful in rhino and wildlife security.

The majority of the rhino rangers celebrate Christmas as a combination of a religious and secular festival. There is not much giving of presents - people do not have the financial resources to buy gifts for each other, and even if they did, there are not any stores that sell any Christmas gifts in the bush.

The rangers will dress smart in their jungle fatigues and boots. Music will be quite a mix, but mostly Maasai gospel and Maasai traditional folk dance - the throaty sounds and the shaking of the neck and the legendary vertical jump.

For rhinos, it is a difficult time, as poachers try to take advantage of the festive period to sneak into the bush and kill rhinos. Security is tightened, and there is a general state of alertness in all our ranger outposts.

So yes, things out here in the rhino area are different at Christmas. But like anywhere else in the world, we get together as family and friends. The ways and means may differ, but the spirit is the same, as we in turn pass on what has been given to each other - love and friendship as we wish each other a merry Christmas.  And from me and the Big Life rhino rangers, we wish you a merry Christmas and a happy and prosperous new year 2014.