BACKING THE UNDERDOG PAYS OFF FOR BIG LIFE KENYA 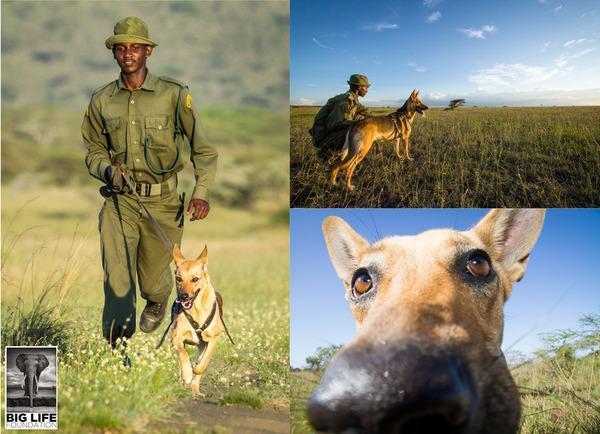 Not all tracker dogs are created equal. There are breeds dedicated to the art, from bloodhounds to beagles. At Big Life, however, we decided to give the underdog a go. Didi comes from the Kenyan SPCA. She was a stray, a ball of fluff found stumbling around a Nairobi suburb.

And luckily for her, Richard Bonham came along. Picking one rescue dog from the line of eager eyes is never easy, but he chose her for the suspected presence of a German Shepherd somewhere in her tangled family tree, a breed known to produce good trackers. She was also still a youngster; the relationship between dog and handler is based on unshakeable trust, hard to forge with an animal with a long history of abuse.

And so it was that this dog from the streets found herself trading the Nairobi sprawl for the wild open spaces of the Amboseli-Tsavo ecosystem. And with her new home an important responsibility: to help in protecting it. Three years on, she is a very handsome animal.

Walking up to her enclosure she looks like any dog, a smile in her eye, cheerful bark and spin in greeting. But when her harness goes on, the playfulness evaporates and it’s down to business. Didi has been trained by her three handlers: Mutinda (himself a converted poacher), Leyian and Joel. She goes out twice a day, tracking a scent laid by a ‘poacher’ who has gone ahead and hidden somewhere in the bush. The team varies the length of time between laying and tracking the scent; she needs challenges to stay sharp.

To watch her work is impressive, a single-minded determination to see a scent to its conclusion. Says Leyian: “When we are on the track we can switch off our minds, Didi is our eyes and we trust her, she will take us where we want to go.”

And this she has done. Didi is still training hard and growing in experience, but has already brought 6 wildlife poachers to book, as well as finding two lost community members on different occasions, one a small child.

But there is no time for revelling in past successes; Didi has her future work cut out for her. Poachers, particularly of elephant and rhino, are becoming ever more sophisticated in their operations and methods of evading capture. Intercepting them is the ultimate objective, but often it comes down to the chase. And there are times when all the technology in the world pales in comparison to the amazing tools provided by nature, packaged for us in this amazing rescue dog.