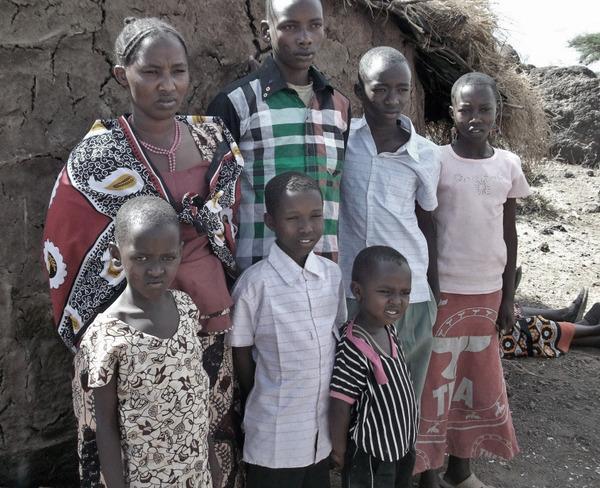 There is a foot path/motor bike trail linking two remote villages on Mbirikani Group Ranch in the Amboseli ecosystem. It is also shared by a host of wildlife, mainly elephant, zebra, Wildebeest and Elephant. Last week, it became the scene of a tragedy. Musa Lenkoti was returning home after visiting relatives, and when he did not arrive in the evening, his wife became worried. She alerted the Big Life Rangers that he was missing.  The rangers immediately left to look for him, and discovered a motor bike on its stand and so they began to cast around with their flashlights for tracks. This led them to a gruesome scene of a dead body which had obviously been crushed by an Elephant only 20 yards from the trail.  At first light, a combined unit of Kenya Wildlife Service and Big Life Rangers, using their tracking skills, read from the tell-tale scuffs in the dust what had taken place. Musa had come round a corner and seen an elephant. Being an inexperienced motorbike rider, he left the bike and ran into the trees nearby. Elephant, in this area are, as a rule, very tolerant of people, so we are perplexed as to why the elephant reacted as it did, by charging. Again, deciphering the tracks, what happened next is both tragic and extraordinary. As Musa ran for his life, he tore off his jacket and threw it on a bush. This tactic is well proven as a distraction when being charged by elephant, and has saved many a potential victim as the pursuing elephant often attacks the item of clothing, allowing the intended victim to get away.  Sadly, the elephant was not fooled. He pursued Musa, knocked him to the ground, repeatedly impaling him with his tusks. What happened next leaves much to superstition…… The elephant then picked up the body, walked back and deposited the body by the trail. What was this? Remorse, guilt, confusion, I don’t know. I have heard many stories over the years of this sort of behavior. One was told to me by George Adamson. When he was game warden in North Kenya, he was called in to shoot an elephant that had supposedly killed a woman while she was carrying water back to her village. George arrived on the scene and soon figured out that in fact the woman had collapsed and died of heart attack. He could then see from the tracks of the elephant that had supposedly killed her, that in fact it had walked down the path later and come across the body, whereupon it collected branches from nearby trees and covered her. The story gets worse. Musa had two other brothers. In 1992, a call came in that a young herder had gone missing. The sheep that he had been herding had returned to the village in the evening without him. The next morning, we started a search operation, in the air and on the ground, but after a week, it was called off, and what happened to this young herder still remains a mystery. But the general consensus is that he was probably killed by a lion. Musa's other brother died just two months ago. He had been knocked down and injured by an elephant last year and never fully recovered. I am not sure of the circumstances around the incident, as it happened in another area, but we are now left with a situation where three brothers have died through conflict with wildlife. Traditionally in the Maasai culture, when a head of any household dies, dependents are absorbed by the husband's family. However in this case there is no close relative to take them on and assume the basic needs of house and shelter - let alone education for his six children.  Big Life has already contributed by giving food and clothing, but I feel we must take this a step further and see that the family do not become destitute and his children have an opportunity to be educated. Big Life’s mandate has always been to try to provide and generate benefits from wildlife, hence our wildlife scholarship program, compensating for livestock killed by predators, supporting schools, healthcare etc.  So with this in mind, I have told Musa's wife and children that we would like to set up a fund to help support their family’s welfare and education. The cost to educate a child for a year is $700 which will be administered through the Big Life Wildlife Scholarship Program. Sponsors that would like to help this fund, can, should they wish, be in contact with the child, so they can monitor progress. We ask that you help make some good out of this tragedy. At the same time this fund will create goodwill for elephant in the future.  Please go to:
www.biglife.org/donations Thank You Richard Bonham.