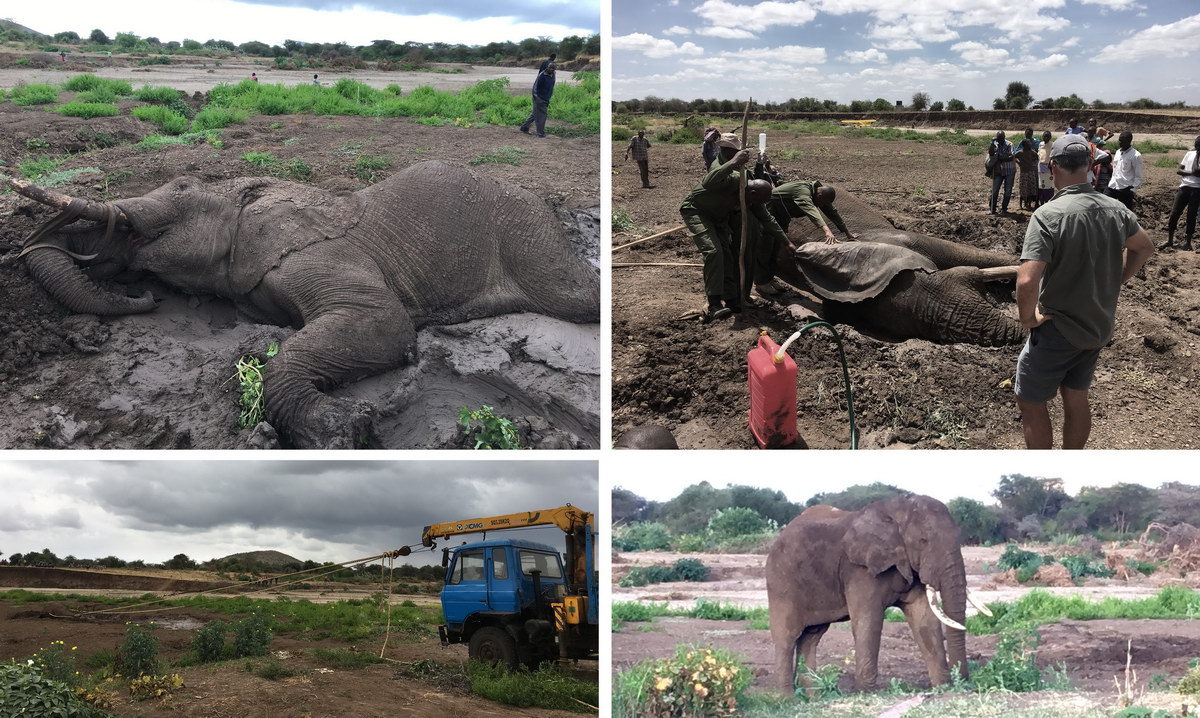 Without human interference, when left to its own devices, nature can usually stand on its own. But occasionally, even nature needs a helping hand.

This was the case when, on a recent joint patrol by Big Life Foundation and Kenya Wildlife Service (KWS), a bull elephant was spotted desperately stuck in the mud of a drying water pan near the Chyulu Hills.

Many of us have been conditioned to believe that if we act heroically in situations such as this, good will always prevail. But what happens in the rare instance when, despite the best intentions and most valiant efforts of a deeply committed team, the “heroes” simply aren’t able to save the day?

Big Life, KWS, David Sheldrick Wildlife Trust (DSWT), and members of the local community responded immediately to help the stranded elephant. Attempting to pull him free from the mud using light vehicles and ropes, the team quickly found themselves potentially facing the same fate as the elephant, and had to retreat. As night fell and dozens of opportunistic hyenas appeared on the scene, Big Life and KWS rangers, supported by DSWT’s veterinarian unit, remained steadfast throughout the night, guarding the elephant from predators.

On the second morning, more trucks arrived with special, heavy duty straps. As rope after rope snapped under pressure, it became clear that this equipment was no match for the swampy, treacle-like earth. Desperate times called for desperate measures. Using the combined power of industrial tractors from a local Simba Cement factory, multiple trucks, and still stronger straps, the huge elephant was finally pulled from the mud onto firmer ground.

Exhausted and dehydrated, despite attempts to rehydrate, the elephant was still unable to stand. The leg that he had been lying on for days was devoid of strength.

As if on cue, reinforcements arrived, and an elephant herd joined the effort to help the fading bull. Sadly, their attempts failed, as they dug both the bull and themselves further into the muddy pit, risking their own safety in an attempt to pull him out of the quagmire. After a massive struggle, the elephants wound up back where they had started, on slightly firmer ground.

Following another long night with the team vigilantly standing guard over the elephant, daybreak arrived. After several more attempts to help him stand, the elephant was finally repositioned onto his stronger side, now completely out of the mud. He was given more water and medication by the DSWT veterinarian team. Yet still, he lay motionless, apart from the slow rise and fall of his breathing. At this point, all we could do was wait.

Late on the third day, rescue teams could see he wasn't going to stand on his own, so with ropes attached to his tusks, and tied to a vehicle, they pulled his heavy head up so that he could manoeuvre his feet underneath. And with that, the bull rose shakily to his feet and took his first tentative steps. The rangers followed him as he walked slowly into the soft evening light, feeding in the Chyulu Hills, which was likely his original destination.

The rangers continued to monitor the elephant’s progress as (we hoped) he regained his strength, and we allowed ourselves to believe that this story might have a happy ending… Until we received the heartbreaking news that he had ultimately succumbed to the stress and trauma of his ordeal.

Although in most cases, nature can stand on its own, the hard truth is that sometimes it cannot. And sometimes there is reason for this that is beyond our comprehension or ability to intervene.

While we struggle to make sense of the loss, we take comfort in knowing that, together with our partners at KWS, DSWT, and the local community, we did all that we could for this elephant. We are happy to have helped him get back on his feet, if only for long enough to reach his intended destination and enjoy a final meal in the Chyulu Hills.