WHILE AN APOCALYPSE OF ELEPHANT KILLING RAGES ACROSS THE AFRICAN CONTINENT, BIG LIFE HOLDS BACK THE FLOW OF BLOOD IN THE AMBOSELI ECOSYSTEM, AS ANOTHER ELEPHANT POACHER IS CAUGHT

Every day now, it seems, we get ever more depressing reports of more elephants being slaughtered across the African continent. Chad, Cameroon, Congo, northern Kenya, southern Tanzania and on and on, the reports of dozens of elephants being killed is a freight train of destruction gathering pace. The statistics - of an estimated 35,000 elephants a year - being killed in Africa, 10% of the continent's population, seems to an increasingly evident real number. 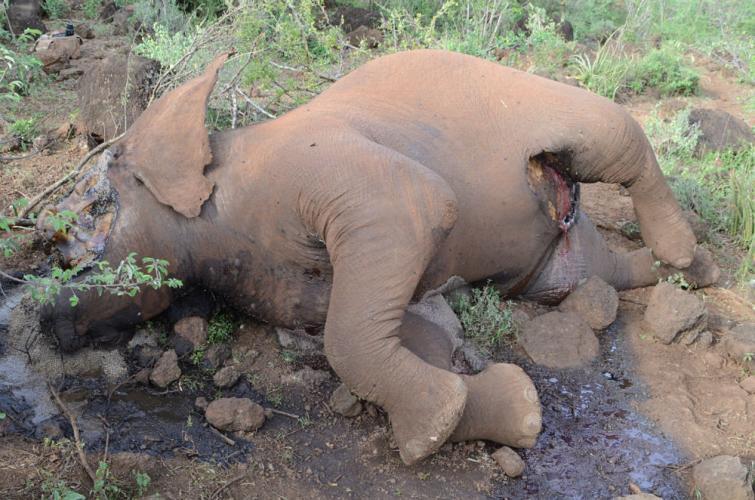 So it seems all the more amazing that within the Amboseli ecosystem, for the first five months of this year we have had 'just' three cases of elephants killed. That is obviously three too many. However, all three cases have resulted in the recovery of the ivory. So hopefully, it seems like in the areas that Big Life operates, the poachers are continuing to get the message and see the risk. Given just how many elephants were being poached prior to Big Life's presence in the area starting the end of 2010, it's a feather in the cap for the Big Life teams out in the field.

Last month, we got a report from our informers that an elephant carcass had been found in thick bush in Rombo. It had been poached and the tusks were gone. Within an hour of the report being received, both Big Life and Kenya Wildlife Service had a team at the scene. The cause of death was quickly established – the young bull had been hit several times with a poisoned spear about four days previously.

As more information started to trickle back to the Big Life HQ in the Chyulu Hills, a decision was made that Jazz, one of our tracker dogs, should be brought into action. It was an ambitious plan, as not only was the carcass a few days old, but by this stage there had been lots of people at the scene and reports of rain in the area (rain washes away the scent that the dog follows). 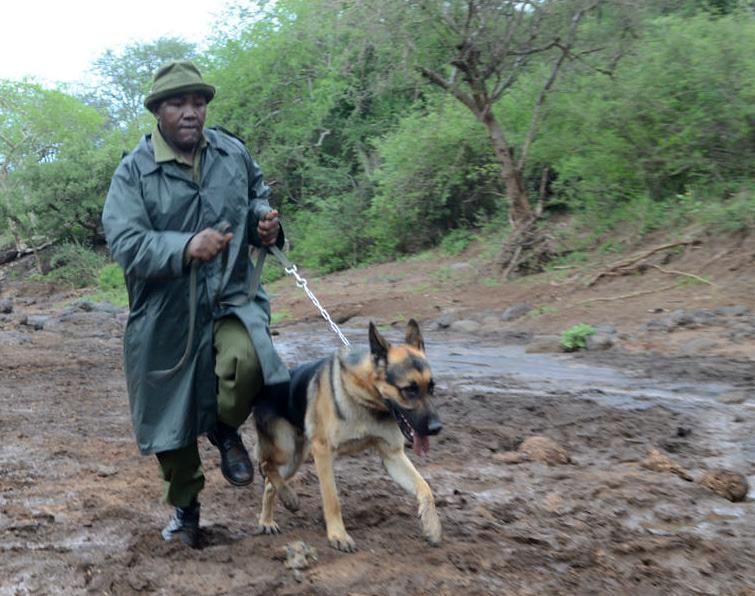 Jazz, one of Big Life's Tracker Dogs, with Mutinda, his Handler

Mutinda (Jazz’s handler) and an ex ace poacher who took us years to catch and bring on side, and I got to the scene with Jazz at about 4 that afternoon, and were joined by two KWS rangers from Click (KWS' investigation team). Jazz was put into action but Mutinda quickly realised that it was an impossible task. We were going to have to get to the poachers another way.

Meanwhile Senior Sergeant Mbumbu, who seems to have an instinct for where the action is, was making serious inroads with our Rombo informers and members of the community in trying to establish who was involved and whether it was a local team or a gang from Tanzania. As we were reaching the despondent realisation that we were far behind to have much hope of catching up with the poachers, he called us on the radio with the news that he had some hot information and to meet him at the KWS Rombo camp, where he already had the names of three suspects.

As we started to collect information about these suspects, the radio crackled that one of the suspects would be moving along the main Rombo road on his motorbike. The KWS and Big Life Rangers were in an immediate manic scramble for their Land Cruisers. It was not far to the road. After a short wait, the poacher appeared. He quickly realized that the game was over. He took us straight to the house recovered one of the tusks. The other is still missing - the investigation is on-going. The suspect was handed over to KWS and appeared in court the following week, where he was remanded in custody.

THe Big Life and KWS rangers, working together, proved again the importance of teamwork, and the value of informers. Meanwhile, however, we mourn the loss of another beautiful elephant killed for a few kilos of meaningless ivory.