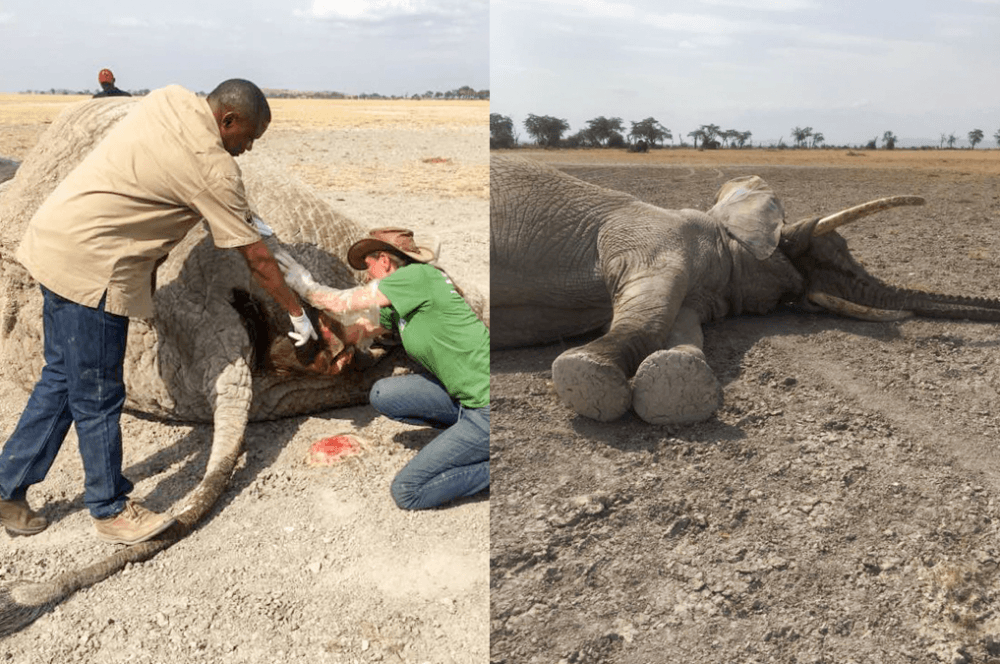 When bull elephants fight, the ground shakes. The 5-ton giants charge each other, colliding with unimaginable force. The colossal battles determine dominance, and severe injuries are often common.

When Big Life rangers from the Enduimet Wildlife Management Area (part of the greater Amboseli ecosystem in Tanzania) found the bull elephant pictured here, they could not know the reason behind his injury. But they did know that the stakes were high.

The call for assistance went out, and the rangers tracked the elephant again, this time with a medical crew to give him the help that he needed. Once anaesthetized, it became easier to piece together what had likely happened.

The wound was just below the tail, and was a hole that went 2 feet deep. This elephant had probably lost the battle and turned to run, but not fast enough. The victor must have chased him down, spearing him with a tusk in the process.

Thankfully, the rescue team – including Big Life, Tanzania Wildlife Research Institute, Longido District Commissioner, Kikosi Dhidi Ujangili/Wildlife Division Anti-Poaching Unit, Enduimet Wildlife Management Area, and volunteers from the Kilimanjaro Animal Crew - was able to treat the wound and send the elephant on his way. So, while he may have lost the battle, it hasn’t cost him his life.

As part of our efforts to support communities and protect wildlife in this part of the ecosystem, Big Life has two rapid response ranger units, funded by the European Union, that can react to emergencies such as this. We hope that this will be one of many more successes to report as we continue our work with partners in Enduimet.