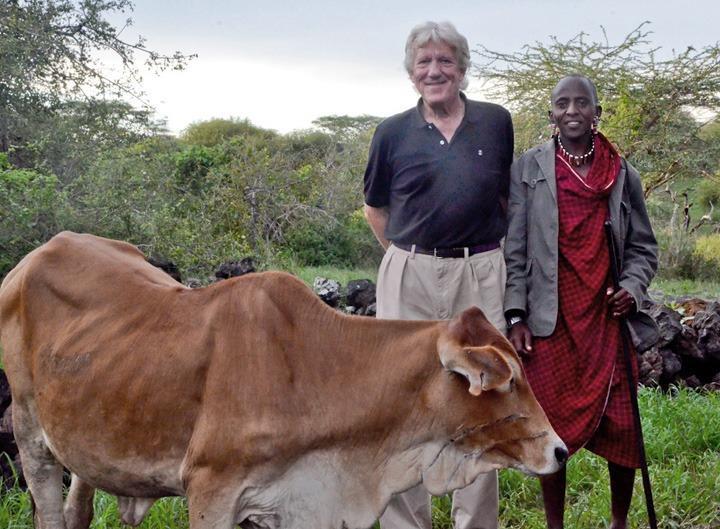 Tom Hill and Chief Kayiok on the 10th Anniversary of PCF

On April 1st Big Life’s Predator Compensation Fund (PCF) celebrated its 10th anniversary. The honored guest at the PCF celebration was Maasai warrior chief Kayiok, who was leader of nearly 1,000 Mbirikani warriors at the time of PCF’s launch in April 2003.

During the past decade, the Predator Compensation Fund has not only changed Maasai behavior -- halting the killing of lions, thereby allowing the region’s population to return to viability – it has also helped to shift the attitudes of the people toward a far broader commitment to wildlife and habitat conservation in general as a preferred way of life in the 21st century. These singular achievements were documented in an independent study of PCF by the Kenya Wildlife Service in 2011.

Having seen the benefits of PCF for himself during its first two years of operation, it was Chief Kayiok who stood up at a critical meeting in 2005 and said to a group of leaders, “Any of you who oppose PCF are wrong. I am the chief of the warriors and I support predator compensation.”

Chief Kayiok concluded his remarks that day with words that are now seen, with the benefit of hindsight, as an historic declaration: “We will no longer kill lions.”

From that day in 2005, lion killing stopped on Mbirikani Group Ranch -- with only two exceptions, both in 2010 during the worst drought in 50 years here; only two lions killed in eight years, a remarkable turnaround from a rate of killing prior to the introduction of PCF of over one lion per month. Local extinction was most definitely at hand, even before PCF was conceived.

Today more than 50 lions are known to inhabit the Mbirikani Group Ranch from time to time as they follow their natural migration routes across the ecosystem. Predator compensation has also expanded greatly over the past ten years to now protect predators and livestock across the entire one-million-acre migration corridor (see map) that connects Amboseli National Park to Tsavo National Park, insuring the ongoing viability of lions in the very cradle of their existence.

Chief Kayiok was honored with the gift of a cow. In my remarks to him, I said, “Heroes – that is to say, people who change the course of history – exist at every level of society, from global heroes like Nelson Mandela to local heroes like yourself. Your contribution to conservation in this vast ecosystem is so great it is difficult to measure. Your leadership will stand the test of time, influencing generations of leaders to come. Chief, you will not be forgotten.”