Unearthing Tim: The Battle to Rescue an Amboseli Icon 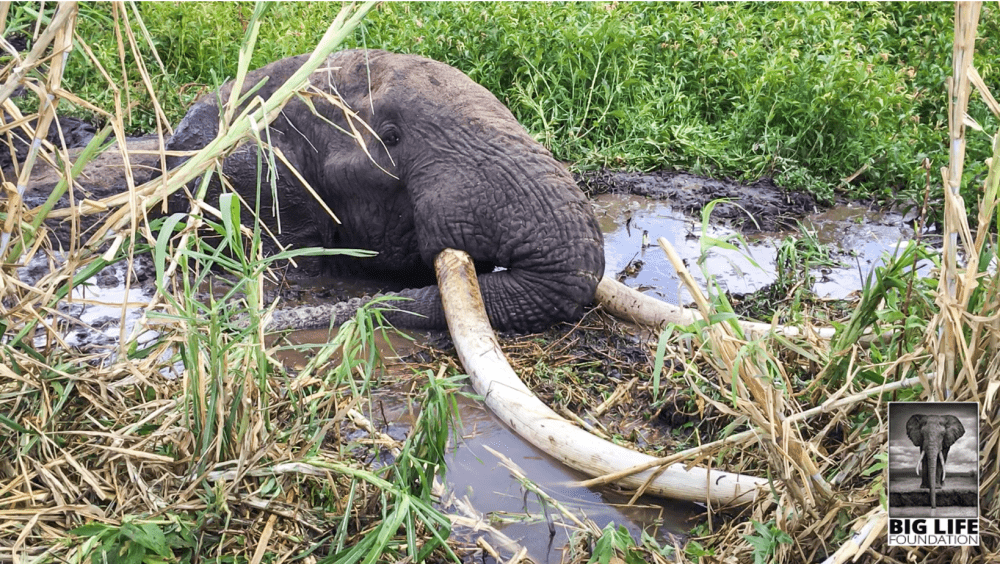 Mondays don’t start much worse than this: a report received of a big bull elephant stuck in the mud deep in the Kimana swamp. Our hearts sank. Given the size, there was a small number of elephants it could be, and a small chance of a successful rescue.

An aerial view confirmed the worst: it was Tim, an icon of Amboseli and one of Africa’s largest and most magnificent elephants. He was stuck in a section of deep mud, surrounded by farms and a growing crowd, and clearly in serious trouble.

Big Life rangers responded immediately, but the outlook wasn’t good. Tim was up to his neck in mud and fully immobilized, with zero chance of escaping on his own. Nor was there a way for any kind of vehicle to get close enough in the swamp, either to pull him out or to dig around him. Failure—Tim’s death—was suddenly an even more real possibility.

Regardless, everyone got to work. This was a challenge of physics: how to pull a 6-ton object out of a suction pit, when that object is alive, thrashing, and has no idea the people around him are trying to help. Tim was understandably aggressive and stressed, and tiring fast. Exhaustion alone can kill an animal, and it became a race against the clock to try something, anything, to save him.

The first step was to loosen the mud, so rangers knocked a hole in a concrete agricultural furrow upstream. Water flowed in, and the mud slowly started to release its grip. Tim could move a bit more, and it was helping, but it wasn’t going to solve the problem.

Luckily, additional support was on the way from all over Kenya. A Kenya Wildlife Service (KWS) tractor had been steadily chugging in from Amboseli since the alert was sounded, and our friends at the David Sheldrick Wildlife Trust (DSWT), drawing from their wealth of experience, were also wrapping their heads around the tools needed to pull Tim out. The answer was going to be a very long tow strap, but that is easier said than done. We needed something 300 m long! A team got to work in Nairobi, stitching shorter straps together and then urgently sent the final product down on a private chartered flight. Meanwhile, the KWS vet, along with the DSWT mobile vet unit, were on their way from Tsavo West National Park.

Things were happening, but would the plan work? The tractor got as close as it dared, which was a farm about 100 m away. The team struggled to get the straps onto Tim, somehow persuading him to lift his head and then slipping the straps underneath. Finally, they were ready. The tractor pulled, and the wheels spun… and spun… and spun. The ground was too soft, and it wasn’t going to work. Another approach was needed.

The tractor set off around the swamp to try and approach from the other side. The land there was drier and firmer, but the closest point of approach was now more than 300 m away from Tim. Time ticked by as the tractor slowly drove around, and an hour later, things were in place again. Now there was space to add some extra horsepower, and two Big Life Land Cruisers lined up in front of the tractor to assist. Together, the three machines pulled, the tow strap went tight, Tim shifted slightly, and then… the strap snapped.

It was disappointing, but there was still a ray of hope. Again the vehicles pulled, again there was a slight shift, but again the strap snapped. Eventually, five strap breakages later, Tim had been repositioned and pulled out of the deepest section. Everyone was exhausted by this stage, human and elephant alike. Ten hours in the baking sun had taken its toll, but adrenaline kept the teams going. Victory felt possible; our work would not be in vain.

After more pulling, and even more strap breakages, the tractor and vehicles finally managed to pull Tim 25 m across the muddy ground and onto firmer footing. Once there, he was too worn out from the ordeal to even stand.

The vehicles kept pulling slowly, trying to help him up, knowing that his life depended on it. And finally, in the last light of the day, Tim stood up. Met by cheers from everyone present, he shrugged the tow straps off before slowly heading back toward the Kimana Sanctuary. The rangers stayed with him until 11 pm, ensuring that he was safely back on protected land, before calling the long day over.

Rangers have been keeping an eye on Tim today, and he appears to be fine, but following two prior encounters with farmers’ spears, it is clear that he has not been deterred from living dangerously. We’re not quite sure how many lives Tim has left, but we’ll continue doing our best to make sure that he lives each of them to the fullest!

A huge thanks, as always, to KWS and DSWT, for helping to turn this incident from a potential tragedy into a remarkable success story.

And to our supporters around the world, thank you! If not for your ongoing generosity, stories like these might not have such a happy ending. As we enter the season of giving, please consider supporting Big Life Foundation and our critical work to protect and secure the Kimana Sanctuary. This valuable area of habitat gives Tim, his fellow elephants, and other wildlife a safe place to call home.