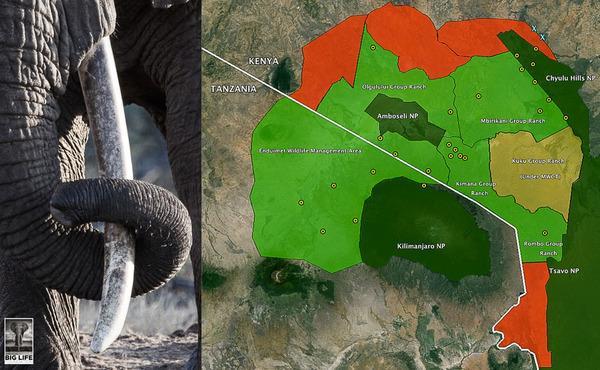 The news sends a shiver down Big Life’s collective spine. The knowledge that as we sit, listening to the message, poachers are moving through our area on a deadly mission: to kill elephant

The news came from an informer on Rombo Group Ranch, an area in which Big Life has only one outpost, but sees the passage of many poachers between Tanzania and Tsavo West National Park, one of the last significant refuges for east Africa’s elephant populations.

The Rombo team was mobilised immediately, but with no armed rangers on the unit, they held back for fear of a potentially lethal encounter with the poachers. The Kenya Wildlife Service was alerted, but their nearest vehicle was four hours away, and by the time they arrived on the scene darkness had fallen.

With dawn of the following day the track was cold, the poachers gone, their next calling card the carcasses of Tsavo’s magnificent elephants.

While Big Life has had fantastic success in our core zones of operation, the outlying areas are still suffering high rates of poaching. We desperately need to expand our reach.

The most efficient way is with a crack mobile unit of armed rangers, permanently on standby and able to respond to emergency threats across the ecosystem. The goal is for at least some of these rangers to obtain Kenya Police Reservist status, giving them power of arrest and the mandate to act while the trail of poachers is fresh.

The orange zones on the map show how this mobile unit could extend our coverage beyond the lime green areas covered at present. The two blue crosses in top right are where poachers killed two elephants this year already, deaths that may have been avoided.

As things stand, delays in effective response are costing animals their lives.

We began the appeal for this Elite Mobile Rapid Response Team two weeks ago. So far, we have raised $55,000 of the $145,000 that we need. This team would allow us to cover another 650,000 acres, the team’s mere presence a known deterrent.

You can read about the Team in more comprehensive detail at this link:

Please help the animals today by making a donation. Please notate your donation for the Rapid Response Team.