THIS WEEK IN AMBOSELI IN THE BATTLE TO PROTECT THE ELEPHANTS.... 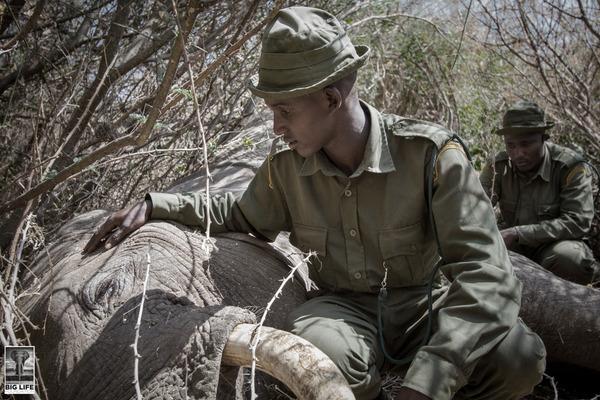 Tracking is an art, passed down from one generation to the next, or learnt through hours in the field. But the signs of an elephant in distress are unmistakeable, and the tracks of humans running behind are even clearer.

Last week, the Big Life Olbili unit was patrolling at daybreak when they discovered these signs in the dust. Realising the urgency of the situation, the message went straight out.

Within an hour there were rangers from Big Life Foundation, Kenya Wildlife Service and MWCT on the scene, with an aircraft from the David Sheldrick Wildlife Trust scanning from the air.

The rangers found the carcass quickly, but the poachers had fled. The team set off after them, but enough time had passed for the movement of livestock and other people to obliterate the tracks. Our tracker dog, Deedee joined the fray later on, but the poachers had enough of a head start to stay ahead.

However, we now have been able to positively identify two of the poachers. They are ‘marked’. So sooner or later, one of them will make the wrong move, and we will be waiting.

The death of another elephant is a failure, but through our extensive ranger coverage, we were onto the poachers immediately. Thanks to some quick action, and a coordinated response from our ecosystem partners, we were able to retrieve the tusks, nearly caught the killers at the scene, and now know the identities of two of them. Once again we have shown that there is no room for poaching in the Amboseli ecosystem.

As always, a huge thanks to all our supporters. Without you, the ivory of this poor elephant would already in the supply chain, and the poachers would be smiling at home.