Things Are Heating up in the Maasai Olympics! 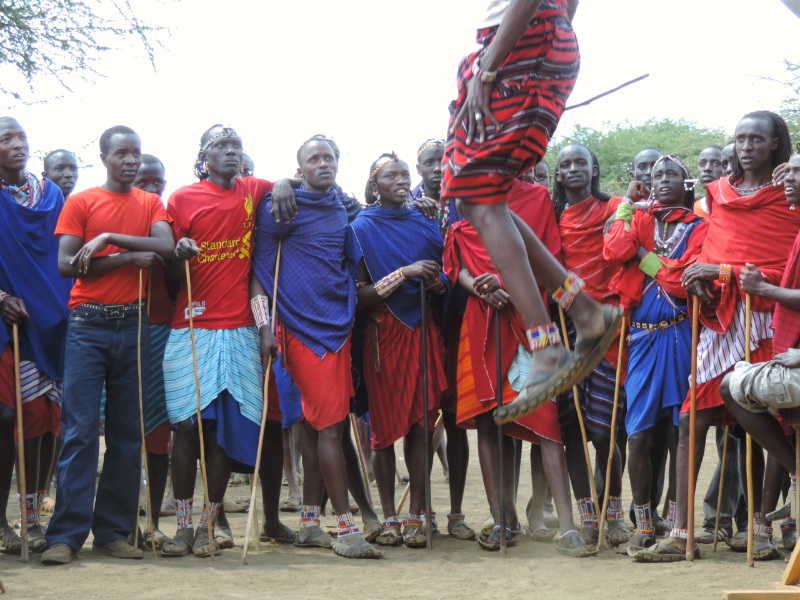 The Maasai Olympics has conservation at its heart. But it is a sports competition just like any other, with winners and losers, close finishes and memorable victories. With the final event less than a month away the lead-up regional events are getting tight, and the athletes have responded with some spectacular athletic displays.

The four warrior villages (or manyattas) have almost completed the round-robin style competition, where each team plays each other once. The top three places for each event score points, which accumulate through the day to produce a winning team, in addition to the individual event winners. The manyatta with the most points at the end of the regional events will hold the “tiebreaker” advantage on Olympics Day, 13 December.

The first such event saw Rombo take on Kuku. Kuku took the victory by the slightest of margins, with a final score of 18-17. Metui Kayiok from Kuku showed his jumping colours, beating the 2012 record by a full 1 inch! If he is able to repeat his jump of 9 feet 1 inch then he will be hard to beat on Olympics day.

The second regional featured Mbirikani and Olgulului, and Mbirikani won this one with a score of 21 to 15. Mbirikani took a clean sweep of the 200m positions, demonstrating strength in that event. Another of Mbirikani’s stars, Lekatoo Joseph, took 1st place in Javelin and the Jump and looks to be in good form in both.

In the third event Olgulului raised their game to beat the unfortunate Rombo, who suffered a second defeat. Lenkai Suyianka from Olgulului took first place in the Javelin with a massive throw of 51.4m, a distance yet to be beaten in any of the other regionals.

Mbirikani then proceeded to maintain their winning streak, beating Kuku 21-15 in the fourth event. Mbirikani again took first, second and third in the 200m and are proving to be the favourites in this category.

The penultimate regional saw Kuku dominating Olgulului. However, the closely fought 5km race would have been a highlight on any stage. Luka Suyianga and Philip both, favourites for Olympic day, dropped the rest of the field early and were neck and neck round the dusty track. As the race went on the crowd grew, there was nothing to separate the runners and the finish was going to be special. Morinka craftily hung back on the heels of Suyianga all the way into the last 400m. Suyianga tried to shake him with a burst of speed but Morinka snuck past in the last 100m to a cheering crowd, winning by 0.1s. This event will be a highlight on the day of the finals, with first place in the 5k and 800m receive an all-expenses paid trip to run the New York marathon in 2015, facilitated by Maasai Wilderness Conservation Trust (MWCT).

With only one regional left to go the warriors of the Kuku manyatta have showed great promise and tremendous improvement since the 2012 competitions, where they finished the regionals at the bottom of the scoreboard. Their regional total of 58 points means that they are currently leading with the top score; should there be a tie on Olympics day.

The last regional features the Mbirikani manyatta against Rombo, who have not performed well up to this point. Although the Mbirikani warriors are unbeaten in the regionals thus far, they will have to attain a score of 17 or above in order to over take Kuku’s lead going into the finals.

The regional competitions have been fierce. Not only are these young men demonstrating that competition can take place through sport rather than lion killing, but we are seeing some truly remarkable athletic performances. With a couple of Kenyan national Olympians sure to be on the sideline come December, we cannot wonder if any future stars will be competing in front of them. We look forward to finding out.