THE SEARCH FOR THE SNARED RHINO : APRIL 24, GAME OVER 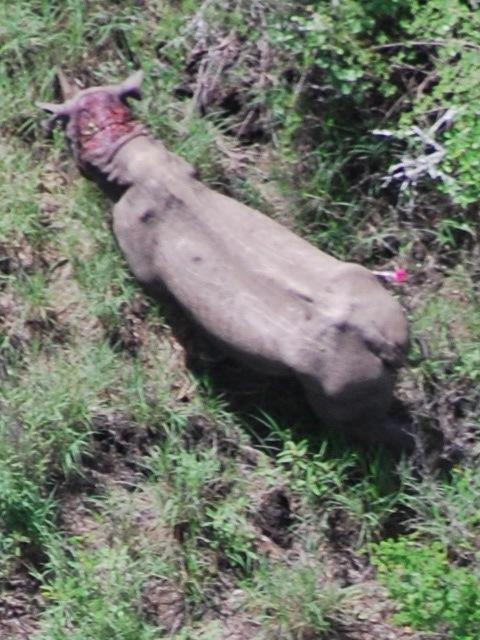 Everything had gone like clockwork.  One of our ground teams found the injured rhino tracks and called in support on the ground. The helicopter arrived and finally, after six long weeks, the immobilization dart went in.  But it was too late.  The injuries caused by the snare had taken their toll and the rhino, so weak, never came round.

As you can see from the pictures, it is astonishing that the rhino lasted so long with such a horrific wound.  The wire cable had cut its way down to the bones of his neck, severing tendons and filled, by this stage, with deep infection and maggots.  There was nothing anyone could have done and by his dying, at least saved us the decision of having to put him down.

It has been a long 6 weeks, constituting at least 10,000 man hours, 20 hours of helicopter time and 35 hours of Super Cub  flying time.  The costs attached to all this are difficult to calculate but the whole operation has probably cost close to $35,000.

We have asked ourselves (and others have also questioned us) was this investment worth trying to save one animal.  The answer to this is simple – we could not give up for two reasons:

The first is that none of us could live with ourselves if we had turned our backs on an animal that must have been in such agony. And secondly, this rhino bull constituted one of our best hopes of making the precarious population of Chyulu rhino viable, as we only have one other breeding bull in our small population. So all our hopes now rest with him.

We have all learnt so much from this last six weeks.  Starting with the level of commitment that everyone involved has shown.  KWS for the resources they invested; the Big Life rangers who worked from dawn to dusk; Ian Craig for giving up a family holiday to support and advise us; the David Sheldrick Wildlife Trust to finance a helicopter to come to our many becks and calls; Peter Achammer, the pilot, who on three different occasions dropped everything to fly down and help us and the list goes on.

But perhaps more importantly it is now much clearer how much we have yet to do to stop another population of black rhino toppling into extinction.

We have always known that the best protection the Chyulu rhino have is their dense and inhospitable habitat.  This is illustrated so well by the fact it took us so long to find the injured bull.  We also know a very important component is the use of camera traps and need to bring this to a much more sophisticated level by creating a unit who are dedicated  to camera trapping - not only to monitor the rhino – but also poachers.  We need to supplement the 6 camera traps we have with another 25, that will cover entry and exit points of poachers and also the more heavily used areas by rhino.  This will undoubtedly be a huge deterrent as I am sure once in place, it won’t take long for us to identify those responsible for the death of this rhino.

KWS have recognized the importance of the Chyulu area as a potential stronghold for rhino in the future, and plan to translocate more rhino to boost the population.  However, before this can be done, there is a lot of work to do.  We have to make more water available, secure the eastern boundary, increase security outposts,  and fund the camera trap operation.  So as usual, so much to do!

It has been a disappointing outcome but still we would like to thank all of you who encouraged and supported us, particularly the David Sheldrick Wildlife Trust and KWS.

In the meantime, we would ask all of you to donate to help Big Life protect the remaining rhino population in the Chyulus. 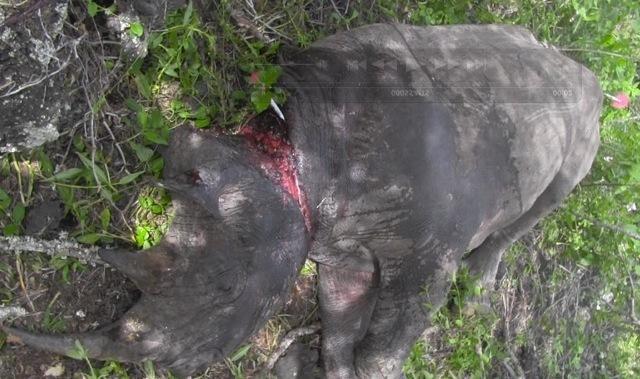