THE RESCUE OF AN ELEPHANT CALLED ESITETI 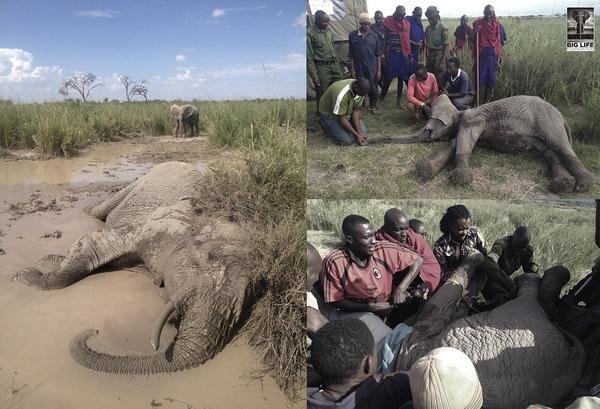 In November of last year, Big Life’s Esiteti team of rangers spotted a female elephant and her two year old calf in a thicket all by themselves. Knowing this was unusual, they continued to keep her in sight at nearly all times. After a few days, it was clear that the mother was ill in some way, although she had no visible injuries and was still mobile.

Katito from Amboseli Trust for Elephants (ATE) was called in. She immediately identified the two elephants- the female was called Zombe, while the calf was yet to be named. The decision was made that she needed treatment, but of what form, no one knew. The call went out to the vet, the dart went in, and Zombe was examined. Unfortunately, no real diagnosis was possible, and the vet decided the best option was to administer a broad-spectrum antibiotic. For a few days, the team thought she was getting better, but she still wouldn’t leave the thicket.

Amazingly, this isn’t the first time Zombe and her calf have hit the press. In 2012 the calf was rescued from a well close to the same area in which they were lingering now. Big Life and ATE co-operated then as well with a successful rescue of the calf and the amazing reunion of Zombe and her baby.

After another week, it was clear that the treatment had failed to help. Every day it was the same report over the radio in HQ: she is still there, still ill, still not moving. In late December, Zombe stopped eating. Throughout this period, Zombe’s entire family kept coming to visit her. Almost every night for over a month, they tried to coax her out of the thicket, but to no avail.

The decision was made to continue to monitor her and hope that she would somehow recover, enabling her and her calf to rejoin their herd. A long shot for sure, but the only chance we had left. We all knew what the only other option was. We simply had to keep on hoping that there might be another way out.

On January 8, the Esiteti team made there way to the thicket to begin their daily vigil for the last time. When they reached there, Zombe had collapsed from weakness and was lying semi-submerged, breathing weakly in the little mud pool that she had drunk from every day for the last two months. Once again the vet was called in, but this time it was clear that there was only one option. There was no chance of her recovering now. And so Zombe’s suffering ended.

ATE had now named the calf “Esiteti” after the area, and the team of rangers that work there. The absolute priority of the day was rescuing Esiteti.

The David Sheldrick Wildlife Trust was contacted immediately. As usual, the well-oiled Sheldrick flying vet program set in motion its rescue process, and were with us within two hours.The darting itself went smoothly but a two year old elephant is already a big animal, and it took twenty people to load the quietly snoring Esiteti into the truck.

Arriving at the airstrip, he then had to be transferred into the plane, another difficult process.

Now at the orphanage, Esiteti has quickly taken to his new family in Nairobi National Park where he has been accepted “incredibly quickly”, in the words of Angela Sheldrick. Hopefully, in a few years time Esiteti will be living the life he was meant to, completely wild and free.