THANK YOU TO OUR KEY DONOR AND ALL OTHERS WHO DONATED TOWARDS THIS!

The elephant in the photo above was shot and killed by poachers on the boundary of Tarangire National Park in Northern Tanzania.

It happened last October. Shots were heard by the park rangers, and when they came across the elephant, shots were also fired at them. The poachers ran and escaped. The Park Warden called Big Life immediately, requesting for Big Life’s two German Shepherd tracker dogs to be brought in to help hunt down the poachers.

Based at their kennels a three hour drive away, next morning, the dogs were on site. Using scent from a knife that had been dropped by the poachers, the dogs were taken to nearby Mijungu town, where one of the dogs, Jerry, picked up the scent and led his handlers to the bus station, where the scent disappeared.

Road blocks to Arusha were set up, two suspicious men pulled off, and in a line up of 20 men back at the Park, Jerry consistently picked both men out.

Since Big Life’s inception two years ago, our success has been notable on the Tanzanian side. When Big Life began in the region, poachers were still driving into the area regularly, gunning down large numbers of everything from giraffes to zebras, and taking them out again for the bush meat markets in Arusha and beyond. Today, due to Big Life’s operations here, this almost never happens.

Elephant poachers from Tanzania were crossing the border into Kenya, killing elephants, and escaping back over the border with no-one to pursue them. Today, with Big Life Foundation being the only organization in East Africa with cross-border anti-poaching operations, this happens much more rarely.

However, those three hours drive to the west of the Tanzanian area in which Big Life is currently operating, poachers are now wreaking havoc in another area, where the animals remain almost completely unprotected.

But with your support, you can again help Big Life start saving lives very quickly.

Tarangire/Manyara, to the east of the Ngorongoro/Serengeti ecosystem, has recently seen a sharp increase in poaching. Like the Amboseli ecosystem, the Tarangire and Manyara National Parks are protected by a government body, but these two Parks are small within a much larger unprotected landscape.

But in this day and age, the wildlife of Africa will never survive within the confined small islands of most Parks and Reserves. Most animals constantly migrate through these unprotected areas, and when they do, just like in Amboseli, they are vulnerable to being killed. The only way that they can survive is through concerted protection in all these huge unprotected areas.

It’s no wonder that for the period 1988-2011, there was a 90% decline in large migratory species, like wildebeest and zebras, due to poaching outside the nearby Parks of Tarangire and Manyara. And today, poaching is out of control and escalating fast, with both elephant and commercial bush meat poachers brutally exploiting the area.

With a large tarmac road slicing through the area, bush meat poachers use motorbikes to scout for animals and shoot them, calling in small trucks to come in and collect. Up to four giraffes, twelve zebras are regularly killed in a single night, their meat loaded into vehicles bound for Arusha, one of Tanzania’s fastest growing cities.

Much of the poaching occurs at night, with spotlights used to blind the animals, who are then gunned down at close range from vehicles. Ivory poachers work on the fringes of the national parks, following the tracks of large bull elephants. Once they find one, they shoot, cut the tusks out and make off swiftly to the nearest settlement, instantly merging into the crowd and disappearing.

All of the community-based conservation rangers currently in the area are underfunded, without vehicles, ill-equipped and poorly trained. They have little chance of out-maneuvering today's poachers. At this rate, the wildlife within the area will be gone very quickly.

Protection of this area, crucial for elephants as well as many other species, needs the Big Life approach - a multi-pronged approach of fully-equipped rangers under commander supervision, with vehicles, night vision, GPS,  supporting tracker dog units, aerial monitoring and informer network.

Because Big Life Foundation's teams in Tanzania - under the leadership of Project Manager Damian Bell of Honeyguide Foundation - has already built a significant and successful anti-poaching infrastructure just two hours away from Tarangire/Manyara, much of that knowledge and infrastructure can now be applied here. 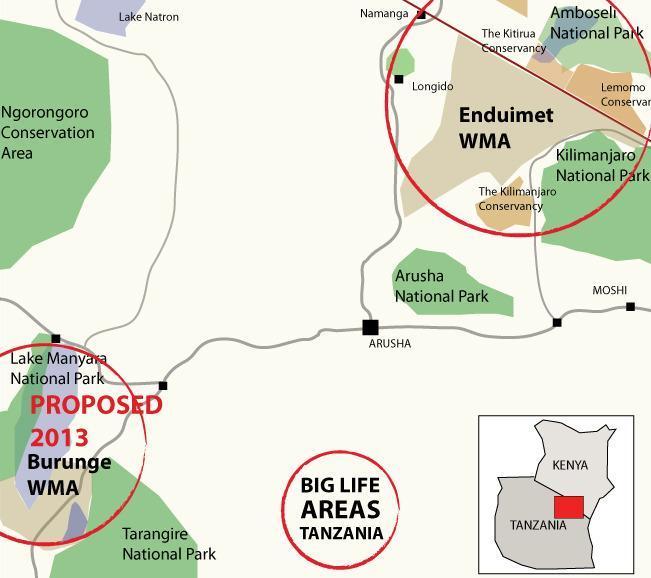 All the  organizations within the Tarangire Manyara ecosystem have requested support from Big Life:

Burunge Wildlife Management Area have asked for vehicles, technical advice and training; the Tanzanian National Parks have already used the Big Life tracker dogs as they realized that this highly trained unit have been key to the success in Kilimanjaro and Amboseli; Manyara Ranch have requested support from the dog units as they continue to lose elephants; and the communities have requested the support of mobile ranger units for the area.

With Big Life’s good reputation growing, it offers the perfect solution for bringing the protection units within the Tarangire Manyara ecosystem together as one.

For Stage One, Big Life will establish a ranger outpost in the Burunge area, a critical wildlife corridor between Manyara and Tarangire. Big Life’s Platoon Commander in Tanzania, John Magembe, will supervise a group of his best rangers stationed there. 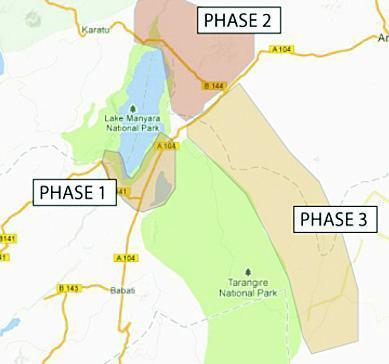 As the illegal demand for wildlife parts continues to grow - from ivory to lion parts to giraffe meat and zebra skin - there will be many who cannot resist the fast, easy profits to be made out of killing these irreplaceable creatures.

We urgently need the funds to help reverse this terrible recent trend, a trend that will otherwise see some of Africa's most magnificent wild animals all but wiped out in the near future. With your help, Big Life will be there, to allow the animals to flourish in peace once again.

Please donate today to help us start fighting to protect the animals of Tarangire/Manyara. Go to :