“THE MAASAI ARE HUNTING LIONS” 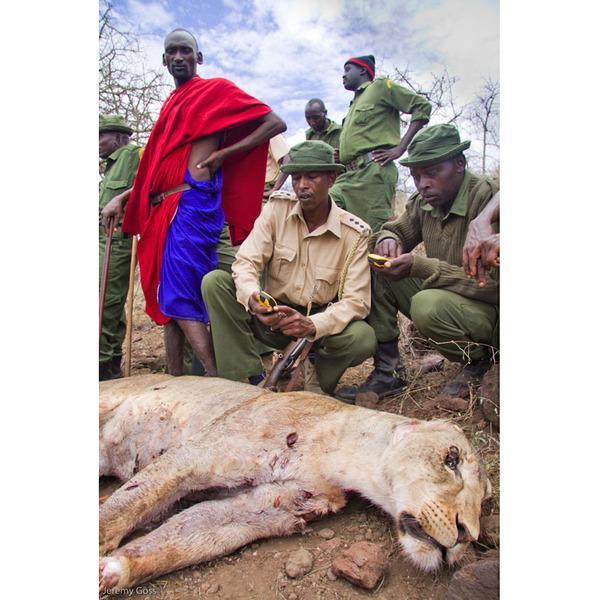 (Jeremy is a scientist living in the Big Life patroled-area for three months to assess the attitudes and behaviour of the local community towards predators, how this has changed over the past decade, and exactly what the impact of the Predator Compensation Scheme has been.)

The radio crackles, a dusty message. Not good news - the Maasai are hunting lions.

The cats have reportedly broken into a boma overnight and killed 40 shoats (sheep/goats) and a cow. The loss is devastating to the family involved. In anticipation, Big Life Foundation has already sent rangers to the spot to monitor the mood, and the latest message ignites a flurry of action.

I join a team of rangers in the back of a Land Cruiser. They’re involved in a fight with deep emotional triggers, and one in which it is hard to take sides. In this pastoralist society, livestock are wealth, and predators have the ability to wreck livelihoods. Retribution can be swift. The rangers joke nervously. The information so far has been vague and the outcome is unpredictable.

We race through the dense bush of the Chyulu Hills and accelerate as we hit the vast yellow plains below.

After an hour’s travel, we arrive. The rangers fan out, led by two men from a boma nearby. Eventually a shout from below, and a sad find. A young lioness, killed by Maasai spears. Her claws, tail and ears are gone, prizes for those most instrumental in her death.

To the men involved, this killing is a form of the revenge, but also represents one less lion threatening their livestock. There is no right or wrong here, and as we turn, the only hope is that the death of one lion will be the end of this particular incident.

But movement in the distance signals that this is not over. A line of forty Maasai men is heading in the direction in which the rest of the pride had fled.

To try to stop them would not only be pointless, but dangerous too. The group is angry, probably irrationally so, and all carry long spears.  The rangers move off in the same direction as the advancing men, parallel, maintaining distance.

In the meantime Richard Bonham has arrived in his small plane and is swooping low over the plain, pretending to chase the lions and thus lure the hunting party in the wrong direction.

Meanwhile, the hunters have skirted one side of a hill and the rangers are on the other, both moving in the same direction but are invisible to one another. A meeting is inevitable. I am with Sambu, a senior staff member of Big Life and excellent negotiator with an in-depth understanding of both sides of this story. Suddenly, the silence is burst by a loud wail, followed by the collective voice of forty men chanting and hollering. The few rangers that I am with take off at a run ahead of me. We can’t see anything, but the volume speaks of a serious confrontation. I stay below the ridge. Minutes crawl by. Slowly things seem to cool off. I risk joining the outskirts.

The scene is awfully real, this is what conservation is about here. Forty Maasai, adorned in everything from Manchester United jerseys to full traditional regalia, face-off with the green fatigues of thirteen Big Life rangers. Every man on both sides is from the area. 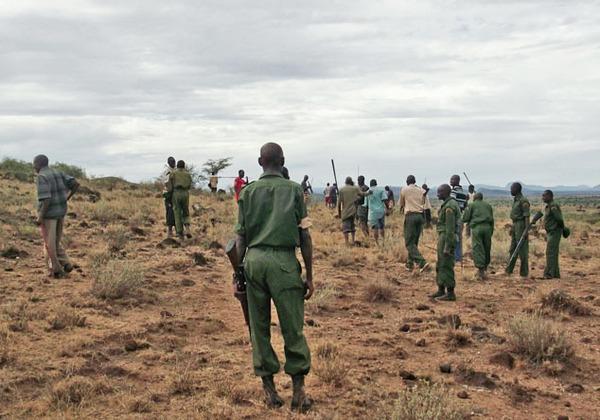 Sambu’s voice battles these proud men. I understand nothing but the body language needs no interpreting. He argues for the lives of the four remaining lions, and slowly I observe the tide begin to turn. As the ugly mess breaks up, faces emerge. I realise that this is not a group of testosterone-driven young men, but a diverse group spanning teens to elders. This hunt was not for pride or bragging rights, it was a response to a terrible loss. Some of the hunters have moved off to the side, and the vocal core begins to shrink. Slowly, men begin to walk away, some return to pull their friends with them. Finally, they are all turned. The landscape breathes out.

Here, as across Africa, lines are emerging in the fight to conserve ecosystems - people that place value on wildlife versus those that don’t. And increasingly this value is tied more to currency than culture. This is no longer a romantic story of an African people holding onto their traditional way of life and coexisting with predators. Livestock were traditionally valued in and of themselves. These days school fees and cell phone bills need to be paid, and the local definition of value is swimming out of focus.

No matter how much you might like having a lion roaring in the distance, or are prepared to coexist with it, there is only so much loss that you will tolerate before it becomes too much. And then you retaliate. I challenge anyone to look me in the eye and tell me that you would do different. It’s the age-old mantra – cost versus benefit. This is not some abstract western economic concept to be bandied about by greybeards, it is the universal trade-off that drives decision-making, conscious or otherwise, in every living human. The notion that local communities need to derive value from wildlife is not new but successful attainment of this goal appears to be elusive. Until each person sees the actual benefit of having wildlife around them, you cannot expect them to act other than in their own best interests, and if that means killing a lion then this should not come as a shock to our western conservationist sensitivities.

Epilogue – The shade of the umbrella thorn barely stretches wide enough to cover the ring of men. This is an important gathering; the topic of discussion is unprecedented. Two neighbouring group ranches had a stake in this lion killing, but they have emerged on opposing sides. The lions killed in a Merueshi group ranch boma and then crossed onto Mbirikani group ranch. The Merueshi hunting party followed them and killed the lioness on the other side of the border. Previously this would have been inconsequential, possibly congratulated, but certainly understood.

But now Mbirikani has a tourist lodge, a large number of people employed in the local game scouts, a compensation program to cover livestock losses to predators. None of which would have been possible without local conservation efforts.

As each man stands to talk, his stick traces unconscious lines in the sand. But the lines are firm - these are our lions, and if you ever follow them onto our land again, you will face arrest by our rangers, and prosecution by the wildlife authority of Kenya. The benefit to us is greater than the cost, and we will protect this benefit. The message is as clear as the blue sky above.