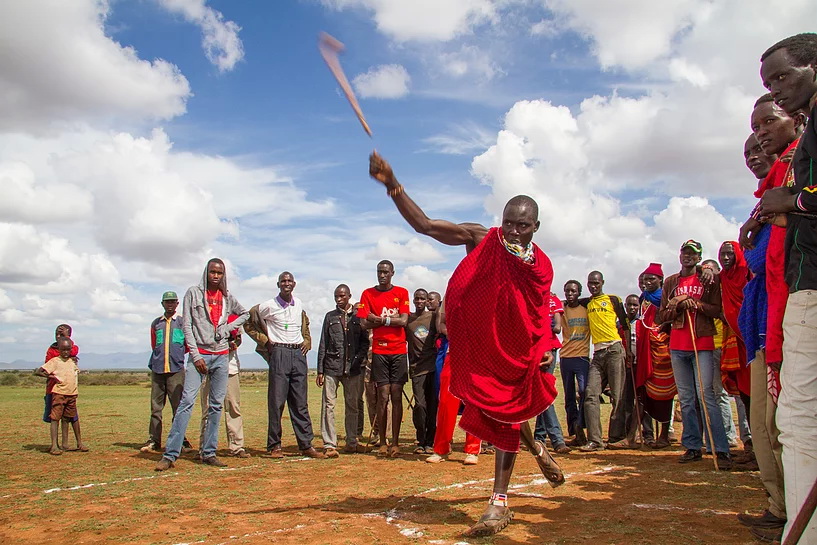 The final battle in the lead-up to the Maasai Olympics finals has come and gone and the results are in. Mbirikani met Rombo on a dry dusty field, the Chyulu Hills a fitting backdrop to this important clash. Going into the day Mbirikani needed to win with at least 21 points if they were to go into the finals with a tiebreaker advantage (if team scores are tied at the end of finals day, the winner is the one with the most accumulated points in the lead-up events).

The day started badly for Mbirikani as Rombo took first and third in the 800m, and the overall team lead. Mbirikani were quick to respond, coming first and second in a hotly contested 200m final, and edging into the front.

The next event, the 5km, has been the source of some epic contests over the regional events, and this race did not disappoint. The halfway point saw two contenders well clear of the field, David Kirisia from Mbirikani and Jacob Parmuya from Rombo. Parmuya was the winner of the event in the 2012 finals and his travels to the New York marathon have inspired awe amongst his peers. Parmuya was eager to remain the favourite and looked the stronger, but Kirisia sat doggedly on his heels, and demonstrated his fitness by pulling away with 600m to go, eventually winning by a comfortable 20 seconds. With a trip to the New York marathon at stake again this year (kindly facilitated by Maasai Wilderness Conservation Trust), this event is sure to be a nail-biter come the day of finals. 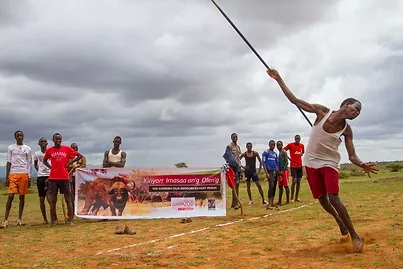 With first and third secured in the 5km run, Mbirikani seemed to be pulling ahead, and another first and third in the Javelin put them in a commanding position. Joseph Lekatoo (who paid his school fees with winnings in the 2012 regionals) won this event by almost 2m. Following strong performances in this event in the other regionals, he is sure to go into the finals as one of the favourites.

Mbirikani then took first and second in a rather lacklustre rungu competition, and these teams will have to improve their performances if either of them are to take this event at the next competition. These results sealed the team win for Mbirikani, but going into the last event they were still one point short of what they needed for the tiebreaker advantage. They needed to at least place in the most anticipated event of the day: the high jump. 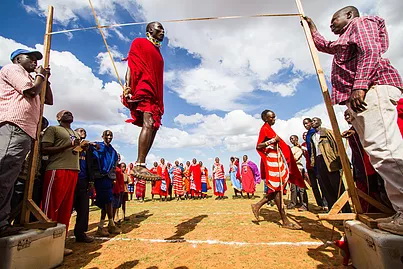 The warriors crowded around and the chanting began. Soon it was down to just three competitors, jumping from a standing position in traditional Maasai style. The chants grew louder as they all strained themselves to get ahead, but at the end of the day all bowed out at a height of 8ft 9in, drawing the event. With two athletes in this draw, Mbirikani finished up winning the day by 24 points to 12, a higher score than was needed to put them ahead of the other teams should a tiebreaker occur on the final day. As one of the favourite teams and on the back of the overall victory in 2012, they may not need it, but we can be sure that Kuku will not let them have victory without a fight.

And so it is that we find ourselves with less than two weeks until the 13th December and the Maasai Olympics finals at the Sidai Oleng Sanctuary. The competition has been tight up to this point but the finals should see an even higher level of athleticism, and closer finishes, as all four warrior teams fight it out for individual glory and the prize breeding bull for the overall winners. Join us if you can!