THE ELEPHANTS’ (LITERAL) LINE IN THE SAND : CHAPTER TWO

The elephants are no longer walking into a likely war zone.

Last year, many of you contributed to the creation of a line of life-saving protection for the elephants of the Amboseli ecosystem. A critically-important 45 km electrified fence stretching across community land around the Kilimanjaro foothills.

That fence would protect farmers’ crops from being raided by the elephants, prevent the elephants from being killed by angry farmers, and help stop the farmland from further encroaching upon wildlife habitat.

It’s largely because of this conflict with humans that in our area of operation, fourteen elephants were killed in 2016. (Meanwhile, In the two million acre ecosystem that Big Life helps protect, poaching is now almost completely under control, with only one elephant poached last year).

Success (& The Inevitable ‘But’)

As we hoped, Phase One of the fence has instantly resulted in far fewer elephant raids. The farmers finally no longer have the constant stress of their families’ food sources and livelihoods being wiped out in one night by rampaging hungry elephants.

This means a happier community, which has resulted this year in far fewer speared elephants, and none killed.

And the bigger picture result of all that? A much greater chance of long-term conservation success in Amboseli. As our sort-of slogan goes: 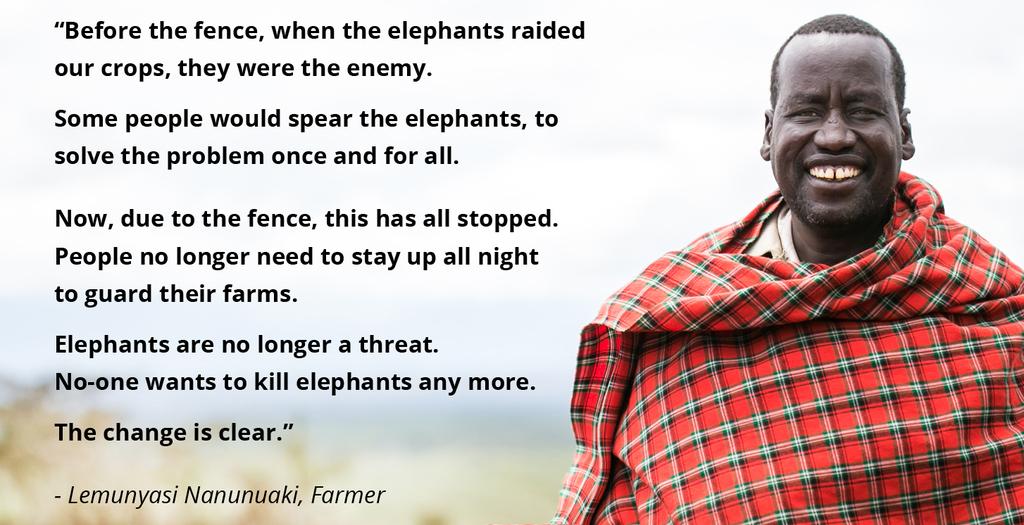 Of course, there’s a ‘but’. The ‘but’ is that we need to complete the remaining two phases of fencing as soon as possible.

With every passing day, in the unprotected areas, elephants remain the enemy, farmland spreads and land ownership fragments.

Which brings us to Phase Two of the fence.... 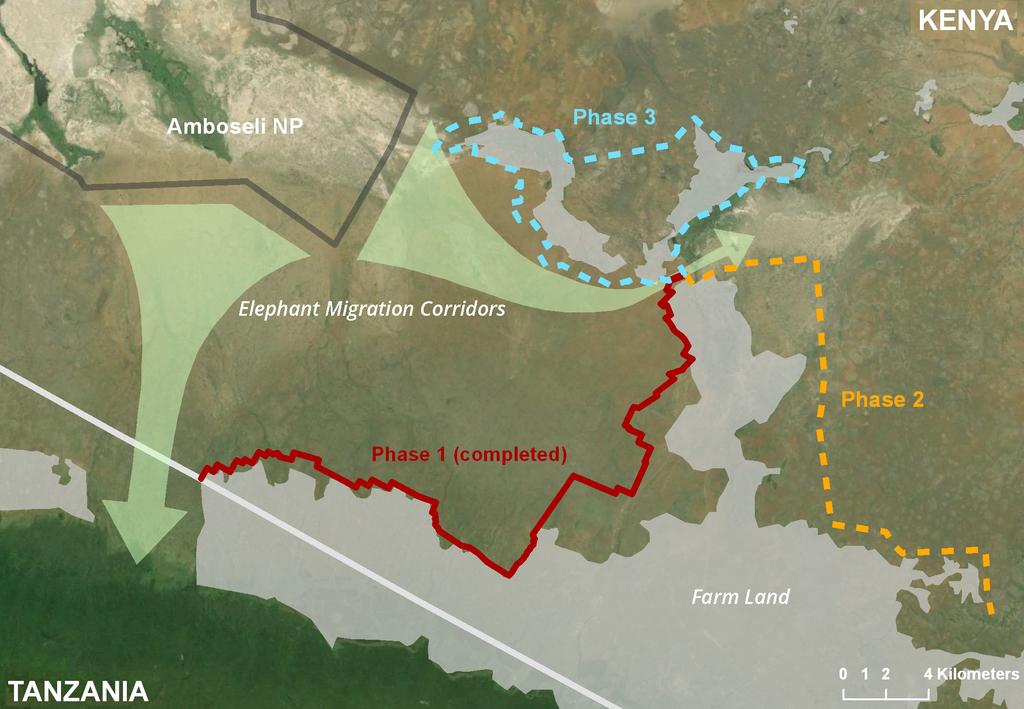 As you can see from the map, Phase Two of the fence will complete and thus fully separate the region of farmland at the base of Mt. Kilimanjaro on the Kenyan side.

Until then, Big Life’s ranger teams will continue to patrol the unprotected land where farmland meets wildlife habitat, chasing elephants out of farms every night during crop-growing season.

This is stressful and dangerous for both the local people and the elephants, and completely unsustainable in the long-term (not to mention a waste of precious Big Life resources).

Last year, many of you paid for the first 45 km of fence.Today, we’re asking if you can help make the next 30 km become a life-saving reality.The cost has gone up a little, to $12,000 per km, but that includes maintenance for the first year.This means that we need to raise $360,000 for Phase Two. 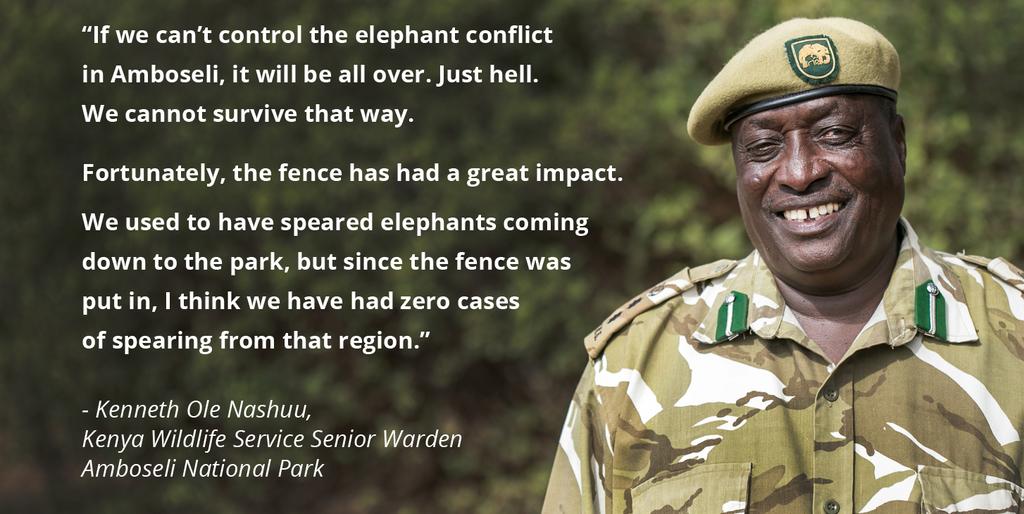 Some of you will no doubt be looking at the photo below and thinking, ‘That’s one funny-lookin’ fence.’An elephant is, of course, an extremely large animal, but it is best stopped by a small fence. Big fences, with big posts, offer more points to get more leverage for pushing the fence over. A low, stubby fence is strong, but still tall enough that an elephant cannot walk over it. The main work is done by long electrified ‘outriggers’ that stop the elephant from even getting to the fence. 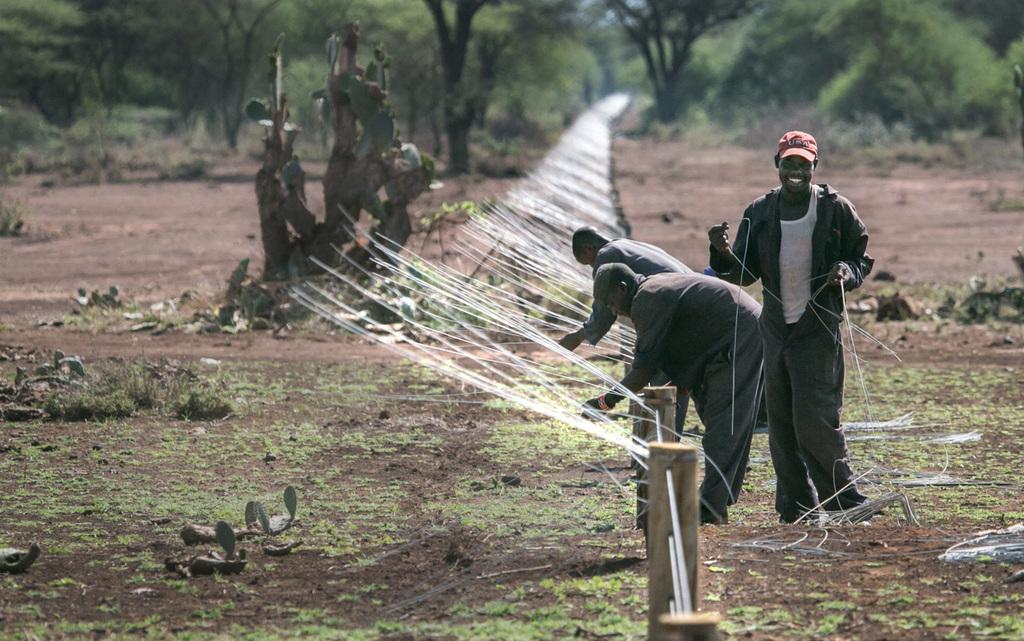 After providing incredibly generous support to Phase One of the fence last year, the Loke Foundation has just committed, with even greater generosity, to match every donation made for Phase Two up to $180,000.

So to state the obvious, every dollar you donate for this appeal will now be worth double.

Big Life is making a profound difference, courtesy of those of you who donated for Phase One of the fence. It would be rather wonderful if the next chapter of the story had a happy ending too....

So if you can, if you would, please contribute today at:

Thank you as always for your support,
Nick Brandt & Richard Bonham