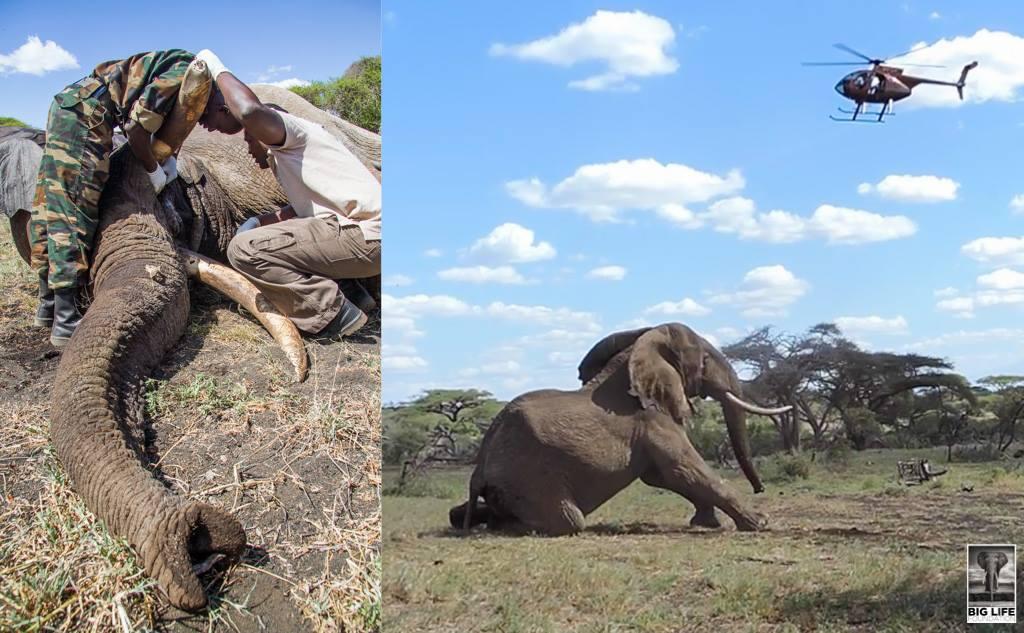 The waterhole at Ol Donyo Lodge hosts a daily meeting - not of men in suits, but of giants in loose grey skins. Elephant bulls emerge one by one from the surrounding bush, trunks swinging and big heads bobbing.

One day last week, something was wrong. One of the biggest visitors was clearly in pain, and Big Life’s rangers could make out what looked like a piece of metal protruding from his trunk. Over and over he sprayed it with water, followed by dust, trying to bring some relief.

Something had to be done, and it was going to take teamwork. Big Life called The David Sheldrick Wildlife Trust, who provided a helicopter. The vet, funded by DSWT, came from the Kenya Wildlife Service (KWS).

Luckily, the elephant was still at the waterhole when the team arrived. The thumping of helicopter blades caused a flurry as the bulls all moved as one, but the vet put a well-aimed dart into the injured elephant. He went down, and the ground team moved in to make sure that he was positioned safely.

On closer inspection, there was nothing in the wound, but it was a straight hole from the front of the trunk to the base of his tusk, ten inches long! It was difficult to tell whether the wound was from a poacher’s small calibre bullet or a disgruntled farmer’s spear, but it was infected and causing great pain for the animal.

The vet cleaned and treated the wound, and within half an hour everyone backed off as the giant rose, groggy but calm. He moved off slowly into the bush and we are optimistic that he will make a full recovery. We will never know exactly how he got the wound, but, be it a poaching attempt or human wildlife conflict, the Big Life rangers are out there every day working hard to prevent both.