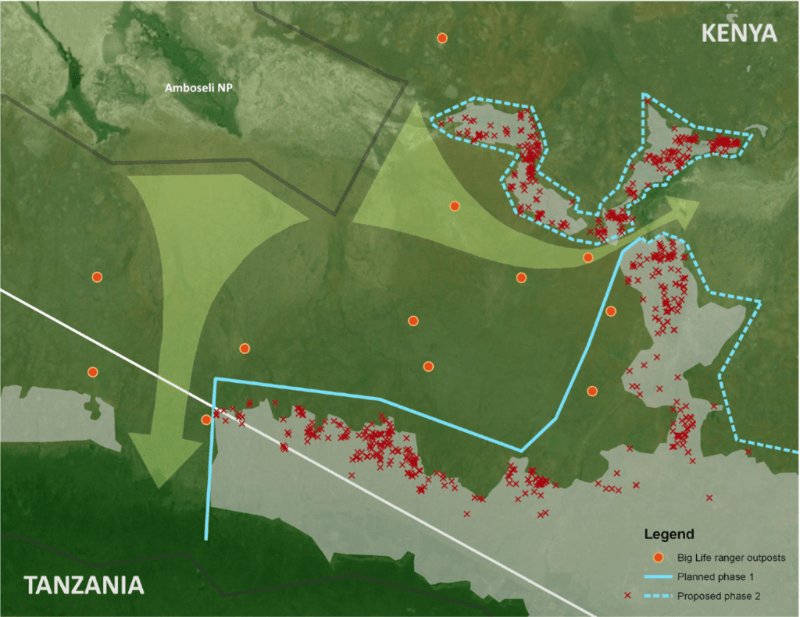 A couple of months ago, we sent out our spring Appeal, BEYOND POACHING, with the aim of raising $400,000 for the first 40 km of what will ultimately need to be 120 km of electrified fence: a line of protection for the ecosystem that stretches across community land around the Kilimanjaro foothills. A fence that would protect farmers’ crops from being raided by elephants, and simultaneously help prevent the farmland from further encroaching upon wildlife habitat.

And more good news: It looks like we will be going with a fence that costs much less than the original design which would have cost $10,000 per km. This new, less expensive fence has already had great success at keeping elephants out of farmland in northern Kenya.

This means that some of the $400,000+ raised will also go to building the first part of Phase 2 of the fence project.

If you look at the map above, the solid blue line was Phase 1, now fully funded by you.

To the north is an island of farmland encircled by a dotted blue line. This area is also frequently invaded by elephants (the red crosses represent crop raiding incidents, which results in more speared elephants.) Thanks to your generosity, we should now also be able to begin construction on this second phase of fencing, along the southern side up through the Kimana wildlife corridor, where in places there is now less than 1 km of wild land left between the farms.

We always thought that raising funds for the fence would be hard, in spite of its incredible life-saving importance, so we’ve been both delighted and hugely relieved at your response to the appeal.

So thank you all, for once again coming through and being responsible for making such a profound difference to this ecosystem - for the elephants, for the other animals and for the people who inhabit it.