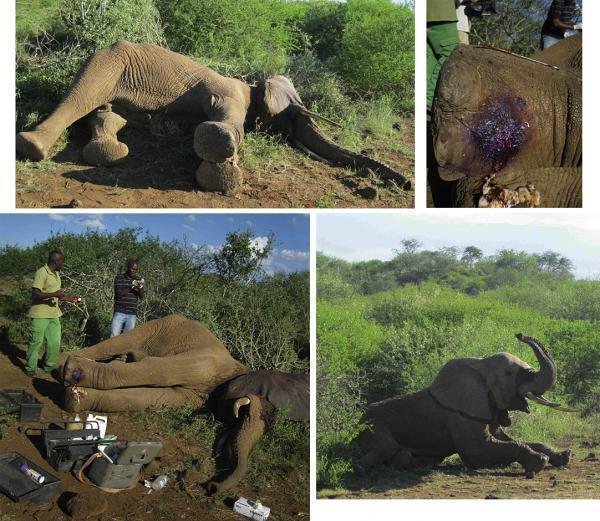 On March 1 a report came in of an injured elephant in the Chyulu Hills. A Mobile Unit from Masailand Preservation Trust, Big Life’s partner in Kenya, was sent to locate the elephant. After 3 days of hard searching the finally tracked it down 60km from where it was last spotted and the vet, supplied by The David Sheldrick Wildlife Trust & KWS, was called in.

The vet arrived from Nairobi that afternoon. After darting the elephant, the vet found that there was a very deep puncture wound in the front of its front right leg that had become infected. The location and depth of the wound led the vet to believe that it was caused by a crossbow trap. These traps work on a tripwire system and are generally aimed at the legs. With such a wound, the animal cannot move very far and will probably die of dehydration and infection.

The vet managed to clean and disinfect the wound and gave the elephant a healthy dose of antibiotics to fight of any further infections. He was very positive with his prognosis and the elephant will continue to be monitored by Big Life and MPT scouts until it has fully recovered.