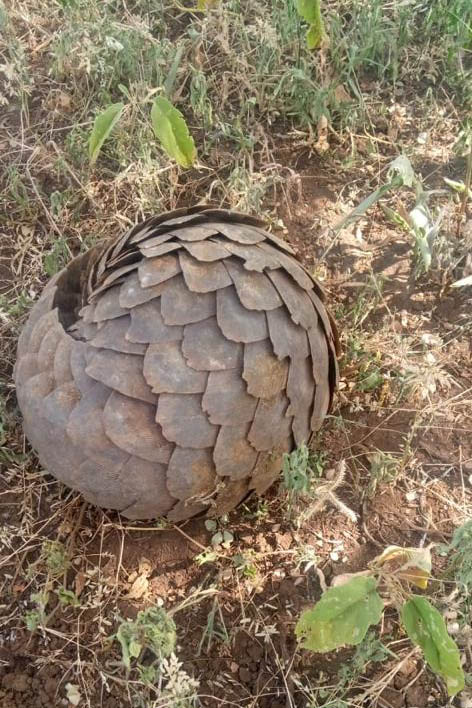 The package arrived coiled into a tight ball, the harmless creature’s natural defense against wild predators like lions and hyenas. While this doesn’t protect the animal against its human enemies, luckily this one was being delivered by friends, not foes.

Pangolins are nocturnal and highly elusive creatures, very rarely seen. So Big Life rangers were very surprised recently when a group of community members arrived at their outpost carrying one. The pangolin had wandered close to their village and been brought to the rangers out of concern for its safety from poachers or opportunists.

Measured by number of individuals, they are the most trafficked animal species in the world. While their meat is considered a delicacy in some countries, the real financial value is in their scales, which are wrongly used in Traditional Chinese medicine (TCM) as a supposed cure for a number of ills. The demand is so great that the four Asian pangolin species have been overhunted to the point that traders have turned to the African species.

A recent report paints a grisly picture of the trade. 2019 was the worst on record, with seizures of pangolin scales (by weight) rising 400% from 2015 to 2019, despite a complete ban on international trade in pangolins that went into effect in 2017.

In 2019, China took the laudable step of removing pangolin scales from the list of raw ingredients endorsed for use in TCM. However, the scales are still included as an ingredient in a number of approved traditional “medicines,” meaning that they can still be legally traded.

Pangolins are extremely sensitive and difficult to translocate, but this one was found close to a wilderness area, so the rangers carefully released it back in the wild near where it had been found. After a time, it slowly unrolled itself and moved off. The rangers stayed with it until nightfall to ensure that it didn’t attract further attention, and then left it be.

We’re grateful for the concerned community members for helping this pangolin. It is the people who live in and alongside wild spaces that will protect nature best. We are here to help them do that.