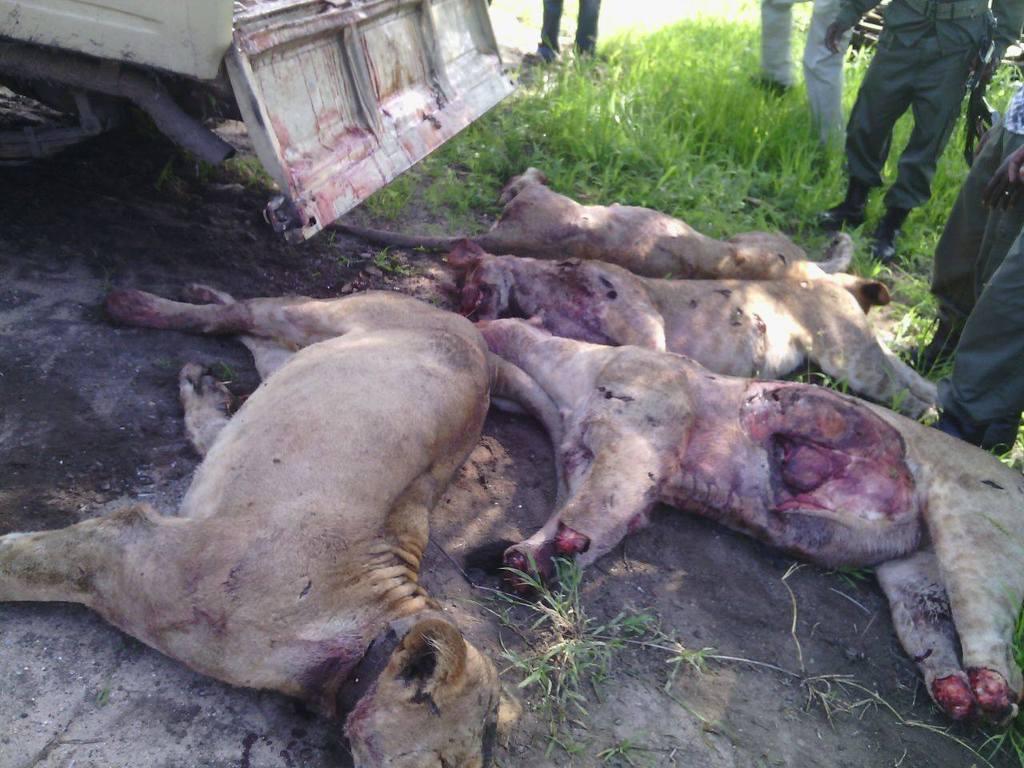 That was the tally when the dust eventually settled outside Tarangire National Park on New Year’s Day. All sparked by the killing of two donkeys by a pride of lions.

Hunting parties, some numbering greater than one hundred people, gathered to exact revenge. Big Life-supported community rangers in the area tried to keep the situation calm, assisted by National Parks rangers and staff from other NGOs, but in the end the big crowds got out of control.

If you can bring yourself to study the photograph, you will see that the paws have been cut off the lions. Traditionally these parts were taken as trophies by the hunters, but it seems very likely that in this case the claws are going to be entering the sick but growing Chinese market for these parts. It is believed that a number of people have been taken in for questioning, but no arrests have been made yet.

This sad situation is in contrast to the on-going success of Big Life’s predator protection efforts in the Amboseli ecosystem of Kenya, the core of which is economic compensation for livestock depredation. This project operates in tandem with the Lion Guardians and the Maasai Olympics, and lion killing is now a rare occurrence here.

In 2014 lions killed a total of 101 cows across the 730,000 acres covered by the Big Life compensation program, and many more small stock, but only two lions were killed in response (this following many years where zero lions have been killed by compensated communities).

Africa’s predators have a rough ride ahead, and conservation interventions need to somehow balance the costs that local people incur through living with these animals. The Big Life compensation scheme has proven a very successful way of doing that, and the results are clear.

Please watch our short film to learn more about the compensation program at vimeo.com/108136114, and consider making a donation to support the program at www.biglife.org/donations