RHINO GUNNED DOWN IN THE CHYULU HILLS 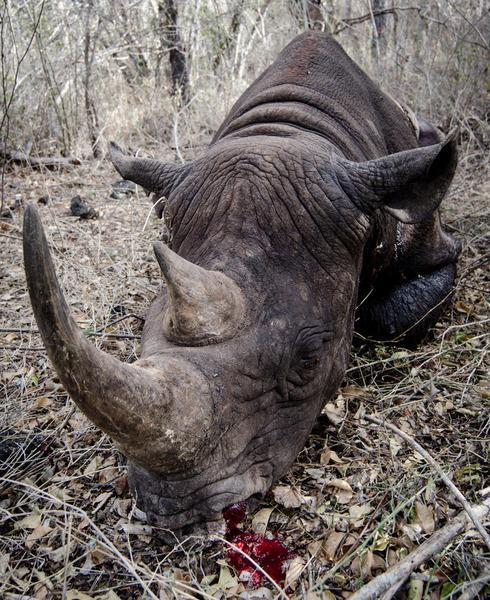 The 18 Big Life rangers (working closely with KWS) that patrol the rhino area in the northern part of the Chyulu Hills patrol tirelessly day and night. Together, each week, they patrol for 756 hours. Despite this though, they rarely get a glimpse of a rhino. The thick bush, coupled with the rhinos' shy nature, makes a sighting very rare. Most of the rangers (even those who have been in the area for years) have only seen one a few times and those have been fleeting glimpses at best. Last month they got so close to one of the few remaining Eastern Black Rhinos in the Chyulu Hills that they could touch it. Sadly it was for all the wrong reasons.

Like all these incidents do, it started with hurried messages over the Big Life radio network. “Gun shots heard by KWS rangers” – first a burst of 5 and then 10 minutes later a further 2. It was getting late and the sun was disappearing below the horizon, the poachers would want to get out of the park before sun rise, they knew that as soon as it was light 5Y-BJY would be in the air carrying out aerial patrol. The first thing to do was to create cut off ambushes using teams of Big Life and KWS rangers, with any luck we would get the poachers as they escaped the park.

The ambush teams were up all night and when Richard and I were in the air at 6am the next morning they were still on the ground, sweeping the area for signs of the poachers and a potentially dead or wounded rhino or elephant. It carried on like this for 72 hours, 30 rangers sweeping the area and Richard and me in the air desperately searching the dense bush for signs of anything. Something had to have been hit, the spacing of the shots suggested that the animal had been hit and then managed to stumble off injured only to have been found and finished off with the further two shots heard 10 minutes later.

On day three the search finally yielded a result; a seriously injured and distressed rhino found in thick bush south of where the gun shots had been heard. Getting too close caused it great distress so we kept our distance and waited for Poghorn (the KWS Tsavo-West vet funded by the Sheldrick Foundation) to arrive, at this point it was clear that rhino had been hit, we just didn’t know quite how bad the injuries were.

An hour later and Poghorn had arrived and crept downwind of the rhino to fire a dart into its right shoulder from close range. As the sedative started to work and we closed in, the extent of the damage that the poachers had done started to become apparent. The rhino’s thick hide was peppered with bullet holes.  All 7 of the shots the poachers had fired had hit what we now knew was a bull of about 15. He had been hit four times in the front legs, twice in the gut and once above the left shoulder. As Poghorn further examined and probed the wounds the elation we had felt having found the animal alive turned to utter despair. The bullets that had hit the gut had tumbled leaving behind a trail of torn up flesh. The four bullets that had hit the legs had shattered the bone to the extent that the left knee joint no long existed. 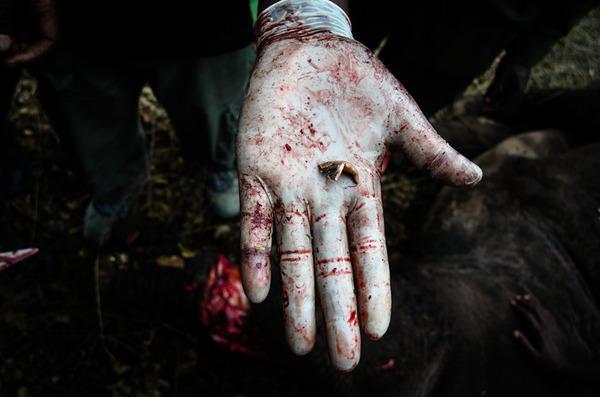 One of seven AK-47 bullets that had hit the Rhino

After lengthy consultation over the phone with rhino experts and vets around the country a unanimous decision was reached; the rhino’s injuries were without doubt fatal. The only thing left to do was put the animal out of suffering after three horrific days of pain.

With the rhino population in the Chyulu Hills so fragile (there are just over 4,000 black rhino worldwide), putting down a healthy bull was devastating thing to have to do. The horns were then removed by KWS and the investigation started - we are still following up on leads. If one thing positive came out of this operation it was the efficiently of the follow up and the fast reaction of both KWS and Big Life.

This incident has reinforced how urgent the need for turning the Chyulus into an Intensive Protection Zone (IPZ) is. KWS working closely with Big Life have drawn up a strategy for further outposts and fencing in the area which would qualify it as an IPZ. In total the project will cost $250,000 to complete and would dramatically increase the wildlife security in the area. Furthermore if the project goes ahead there have been 14 black rhino earmarked for translocation to the area – this would result in an almost doubling of the population here. If you would be interested in funding this project expansion directly please get in touch with us at This email address is being protected from spambots. You need JavaScript enabled to view it.