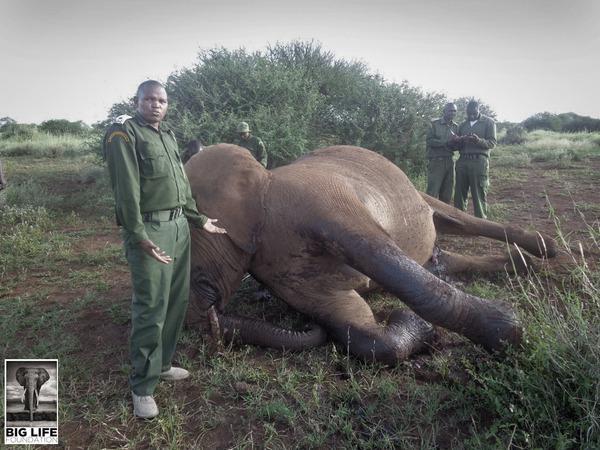 Just south of Amboseli National Park, the slopes of Kilmanjaro descend across the Tanzania border and on towards the Kimana Wildlife Sanctuary. It was here that a herder tending his sheep came across a dead elephant, so fresh that blood was still seeping from its wounds. Even more tragic was that this elephant was a pregnant female, soon to have given birth. Her name was Tanwira, as named by the team at Cynthia Moss' Amboseli Elephant Research.

The herder was a relative of one of the Big Life rangers, who he called on his mobile phone. Within an hour, a Big Life team and Kenya Wildlife Service were on the ground.

It is not often that a spear kills almost instantly, but in this case the elephant had died only 20 meters from where it was speared. This made forensic work easy. Initial signs showed the tracks of a stampeding herd of cattle and 3 people leaving the scene of the crime. What perplexed everyone was that they had left without taking the ivory…

A swift and good decision was made that the rangers would not follow the tracks in uniform, which would have told everyone that we were onto them. So, quickly donning civilian clothes, the rangers tracked the suspects to a village only about 6 miles away, then pulled back to regroup.

The evidence - the spear embedded 4 feet into the elephant’s rib cage, was collected. Spears in Maasailand have a signature; everyone knows who owns which spear, so the next morning the spear was taken to the village for identification and the owner with it.

The person has been identified, but is denying that it is his spear, and appears to have an alibi. He is helping with enquiries and others suspects have been brought in for questioning.

There has been some hasty reporting by other groups on the incident, stating that the elephant was poached. Unfortunately the media has picked up on these potentially incorrect accounts. We are working to discover the exact circumstances under which this elephant was killed and will provide an update once we know the details.