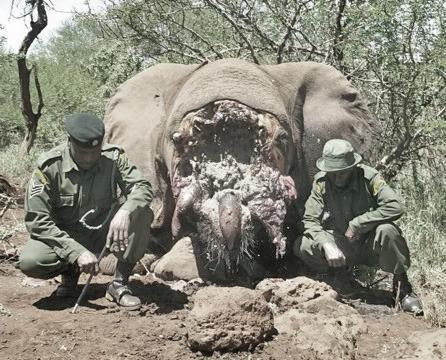 The last elephant that we lost in our area of operation - that we know of - was in early January. It was not a good start to the New Year, but dare I say it, we have not had a successful poaching attempt since. In that case, we never made an arrest and the trail went cold.

Despite this, the undercover informers kept on the scent, and narrowed it down to a couple of the usual suspects. Then a few days ago, we had a lucky break.  The rangers from the Maasai Wilderness Conservation Trust, our neighbors, called Big Life and said they had something and needed support: an Elephant leaving a small blood trail had been spotted and together with KWS we all got on the tracks. They led to Kimana sanctuary.

After a day of painstaking tracking the elephant was found, and to everyones' immense relief, the wounds were not serious - a flesh wound from a spear in the leg. So he would survive.

More information came in: three poachers who were the prime suspects from the January killing had been spotted following the wounded animal, but had left the tracks when it became clear the wound they had inflicted was not fatal.

In a joint operation, the three suspects were arrested. Currently they are being held in custody having pleaded not guilty but so far they have have not been able to come up with 150,000/= bail. This heavy bail imposed is in itself a breakthrough, as it is an indication that the government is fulfilling its promises of treating wildlife crime seriously.

So let's wait and see the outcome, and hope for a stiff sentence.