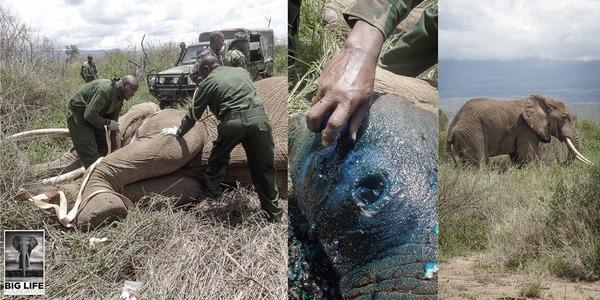 One day you’re down, the next you’re up. Losing two elephants to poaching (and now a third in the form of the pregnant female to what may be human/wildlife conflict) since the start of the year has been disheartening, but it’s the positive stories that buoy us at Big Life.

On March 16, a Big Life ranger unit was operating in our area to the south of Amboseli National Park. They came across a lone bull elephant, walking on only three legs and clearly in distress. The rangers got closer, and discovered a deep wound on his badly swollen fourth limb.

The team immediately called the Kenya Wildlife Service (KWS) with GPS coordinates of their position, and the response was fantastic. Within hours, KWS had a vet on the ground and the elephant was anaesthetised.

Closer inspection of the wound showed that it was most likely inflicted by a spear, but not through a poaching attempt. This was the result of an oft-neglected threat to elephants - human-wildlife conflict. In a resource-constrained land, croplands are an irresistible attraction to wildlife, and elephants can be destructive. People defend their crops in all ways possible, and sometimes this takes the form of sharpened spears.

This was a reminder of the importance of our efforts to manage human-elephant relations in the ecosystem. Our teams respond to reports of crop-raiding wildlife, intervening with non-lethal means. This help is greatly appreciated by the community, and goes a long way to easing the tension between human development and wildlife conservation.

The elephant was treated and successfully revived, but this was only the start. He is a bull in the prime of his life, approximately 40 years old with two stunning and very valuable tusks. The injury makes him easy prey for poachers.

As a result Big Life has deployed two teams to the area and they have been tracking him daily.

We can happily report that three days later he was already putting weight on the leg, clearly a good job done by the vet! We will continue to see him through his recovery, and if we have anything to do with it, a long life ahead.