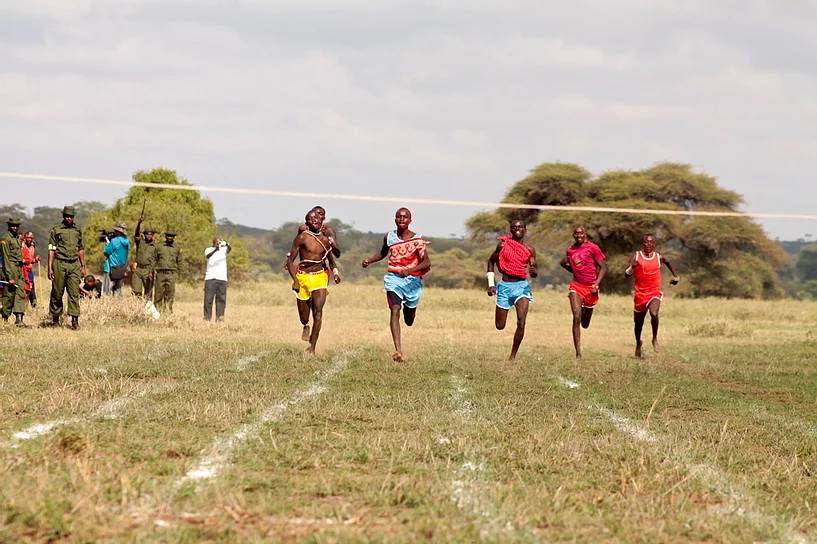 On the 28th August 2014, the second 2014 regional competition was held on Olgulului Group Ranch. This competition was between the 2012 Maasai Olympics champions, Mbirikani Manyatta (warrior village), and the 2012 3rd place winners, Olgulului Manyatta. It was expected to be a tough battle as the warriors from Olgulului vowed to win this year’s championship.

The competition opened with the 5000m. Of the 12 runners only six managed to finish the race. Mbirikani took 1st place while Olgulului took 2nd & 3rd. The winners were David Kitisia 15.59 minutes, Shungeya Nepayiai 16.08 minutes and Moses Kimiti 16.51 minutes.

The second event on the pitch was rungu throwing (for accuracy) from 25m. Eight participants were each given three attempts to get the rungu through a tire for 3 points. The first round saw only one participant hit the target, the second round had two, and so a tiebreaker was required. The distance was reduced to 20m. Like the 500m, Mbirikani took 1st place and Olgulului took 2nd & 3rd. The Olgulului Manyatta should have won this event, having produced the overall winner in the last MO Olympics final, but their 2012 rungu champion was made warrior chief and therefore cannot compete.

The third event was the 800m. With 12 runners two heats of six were required before the final race. Each manyatta had three athletes participating. Olgulului took 1st & 2nd (Charles Sangale at 2.03 minutes, Samanya Kiparnat with 2.05 minutes) and Mbirikani took 3rd (Ikoyo Masarie, 2.06 minutes).

The Mbirikani Manyatta was confident to take the 4th event, the 200m sprint, as they had four athletes competing in the final and Olgulului only had two. The odds were with Mbirikani and they took all three positions. The winners were David Lenkai 22.35minutes, Ntitika Ntutuma 22.38 minutes and Jona Naanyu 22.44 minutes.

Next up was spear throwing (javelin) for distance. This three round event attracted 12 participants. Mbirikani was favored to take this event, and their lead contender opened up strongly with a distance of 48.3m in the first round. Come the final throw Mbirikani’s Lekatoo Joseph threw an impressive 50.8m, securing 1st place. This was a shock to Olgulului as their leader hit a distance of 48.9 m in the second attempt. In the end Olgulului was happy with 2nd and 3rd place from Simon Manase, 48.9m and Lenkai Suyianka 46.1m.

The day’s final event was the High Jump, a signature Maasai skill. Olgulului was set to win this competition, as they had the tallest warrior and the crowds swelled with Olgulului spectators as they came to watch their best jumper win. A shorter Lekatoo Joseph, from Mbirikani, surprised the crowds by taking 1st place with 31.2ft and Alex Kipees, also from Mbirikani, squeezed in at 2nd place with 30.6ft. The Olgulului favorite, Saitobik, came in 3rd at 30.3ft.

Home field advantage didn’t play out in this regional event and the Mbirikani Manyatta took the lead with 21 points over Olgulului’s 15.