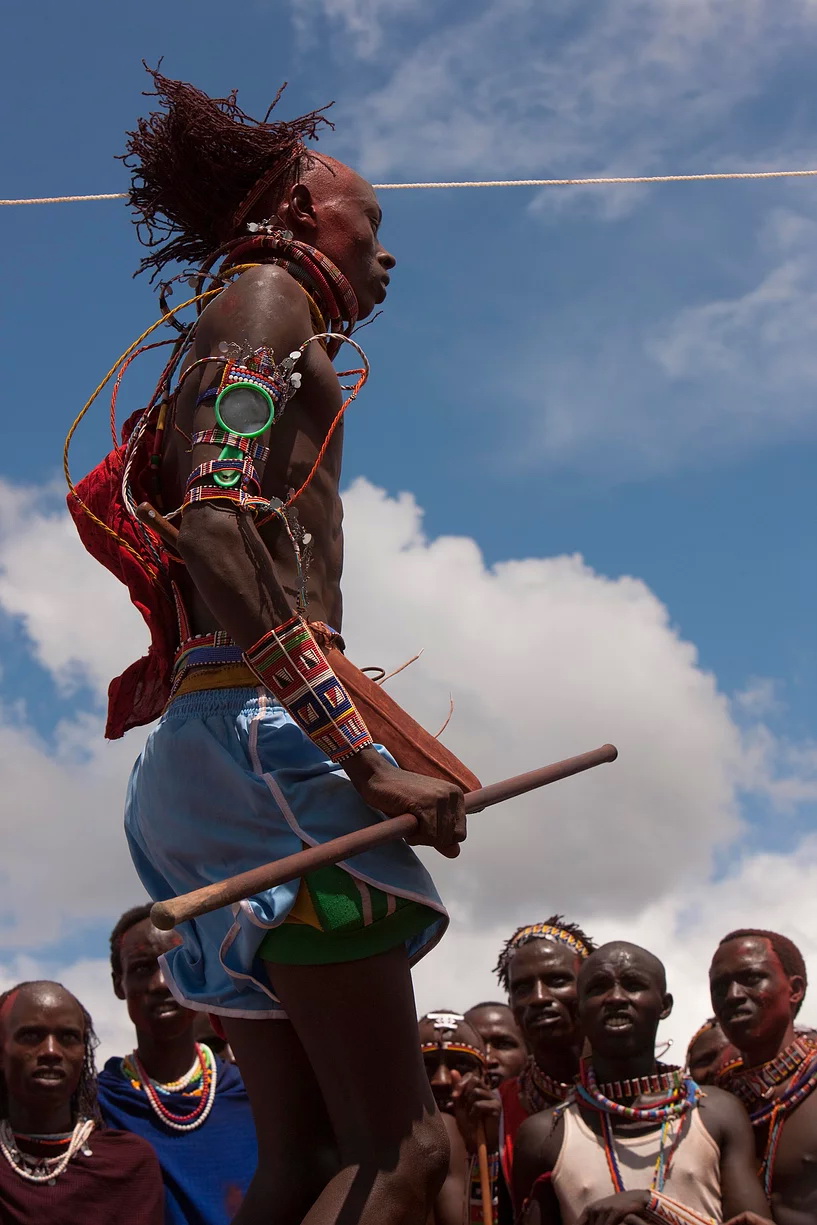 The first regional event of 2014 took place on the 23rd August, as part of the second Maasai Olympics hosted in the Amboseli-Tsavo ecosystem.

Officials judging the competition arrived at the Rombo site to find the host manyatta (warrior village), Rombo Group Ranch, sharpening their skills ready to take on their opponents, Kuku Group Ranch. After a delay in start time, due to Kuku’s late arrival, a scuffle ensued as one of the athletes presumed to be competing for the Rombo Manyatta changed sides to run for the Kuku Manyatta. Rombo fought to disqualify him from competing for either side, but after a long deliberation both coaches agreed to let him participate, and he will represent Kuku in the next regional event. With tensions in check, the games commenced.

The first event on the pitch was the 5000m run. A total of 18 participants, 9 from each team, began the race. Taking just over 14 minutes to finish, the competition was fierce, and by the finish line only 8 participants were left. Jacob Parmuya from Rombo took 1st place, followed by Lukas Suyianka in 2nd and David Kirisia in 3rd, both from Kuku.

The second event, javelin for distance, had 12 participants each of which were given three attempts. The furthest distance thrown was 49.8m, from the Kuku Manyatta. Overall, Kuku took 1st (Nkaitole Kiruti, 49.8m) and 2nd place (Ole Nairowua Meeki, 46.4m), while Rombo took 3rd (Elijah Tamei, 45.1m).

Twelve warriors competed in the third event, rungu (a wooden baton) throwing for accuracy. Each was given three attempts to hit a target (a car tire) at a distance of 25m. Of the 12 competitors only two managed to get the rungu through the target for 3 points. The third warrior hit the outside of the tire, earning one point. A tiebreaker for 1st and 2nd was required, and the target was moved 5m closer. Neither hit the target on the first two attempts, but Daniel Kasaine from Kuku nailed it on the third, making him the rungu winner. Second place was taken by Rombo’s Metuo Tipape and 3rd by Senteu Mparo from Kuku.

The highly anticipated 800m attracted much attention and spectators jostled to the race line eyeing the participants to predict who might take the event. The best from two heats were selected to go the final, and as luck would have it each manyatta had three. In the end Kuku took 1st (1.41 minutes) and 2nd place (1.44 minutes) and Rombo took 3rd (1.48 minutes).

The final event of the day was the High Jump. Rombo had the advantage as they had the tallest warriors, and though height isn’t always the determining factor, it was on this day. All three winners were from the Rombo Manyatta: Metui Kayio 9.1ft, Kisham Lemoyian 9.0ft and Saruni Kuka 8.9ft.

After 6 hours of intense competition the scoreboard was tied at 18 points each. The manyattas will have to see how they fare against the other teams in the next round of regionals. ​​​​​​​​​​​​​​​​​​​​