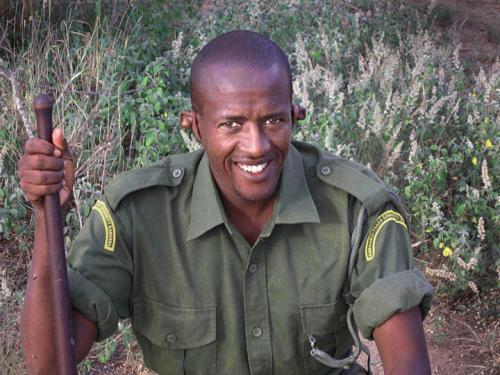 On February 17, a report came in to the new Big Life base at Osiwan that a lion had killed a donkey not far from the base, and that Morans (young Maasai warriors) had gathered in order to kill it.

There was just one ranger at the base, Nkapapa Kombe, as the main team were out on patrol. When Nkapapa got the report, he donned his uniform, called in the incident over the radio, and proceeded into the bush to see what he could do to stop the killing.

After a while, Nkapapa came face to face with the group of the Morans. They were now in a standoff : one small unarmed ranger (Nkapapa is just 5'3"), facing a group of Morans with spears. Nkapapa told the Morans that if they wanted to kill the lion, then they would have to kill him first.

After a moment, the Morans backed down. The hunt was stopped completely when Nkapapa enlisted the help of the Elder from the village nearest the base, who was also the owner of the donkey that had been killed. The Elder told the Morans that the donkey was his, that his son had just been employed as a Big Life Ranger, that he had no desire for the lion to be killed, and that they should disperse and return home. They did, and another lion killing was averted.

Thus by including the local communities in the protection of the wildlife amongst them, it helps both the people and animals of the areas benefit and thrive.