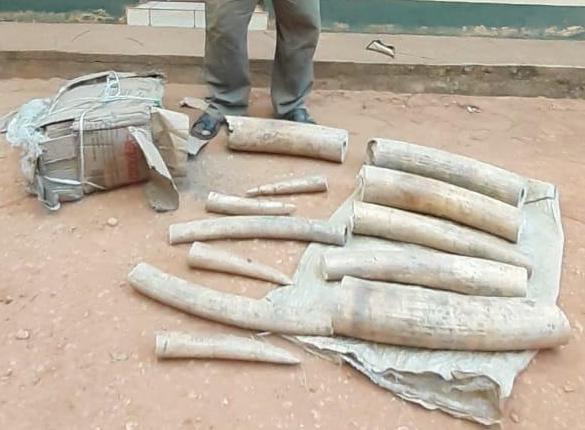 An informant received a tip that someone was trying to sell ivory. The trafficker had 12 pieces weighing just over 35 kg. Posing as an interested buyer, the informant laid the trap, and KWS made the arrest.

These 12 pieces will never make it to Asia. They’ve been confiscated and will join the government stockpile for cataloging, DNA analysis, and presumably, ultimately destroyed. The last big ivory burn in Kenya took place in 2016, the world’s largest at the time.

But it’s worth noting that these 12 pieces came from 4 tusks that had been cut into thirds for easier transport (and hiding). While the investigation is ongoing, we do know the two elephants these tusks came from were not from Amboseli. And the arrest, which happened closer to Mombasa, shows just how broad our informer network operates, well outside our area of operation.

Big Life’s rangers and informer network continue to seize ivory, but we’re noticing less and less moving through the ecosystem. Whether that’s due to a reduction in demand in Asia as a result of legal ivory markets closing, and thus a lower price point, or other reasons, we can’t say for certain.

What is for certain: we will never stop trying to stem the supply of ivory from Greater Amboseli. Thank you for your support keeping our boots on the ground and our eyes on the horizon.