FROM IVORY TO ASHES 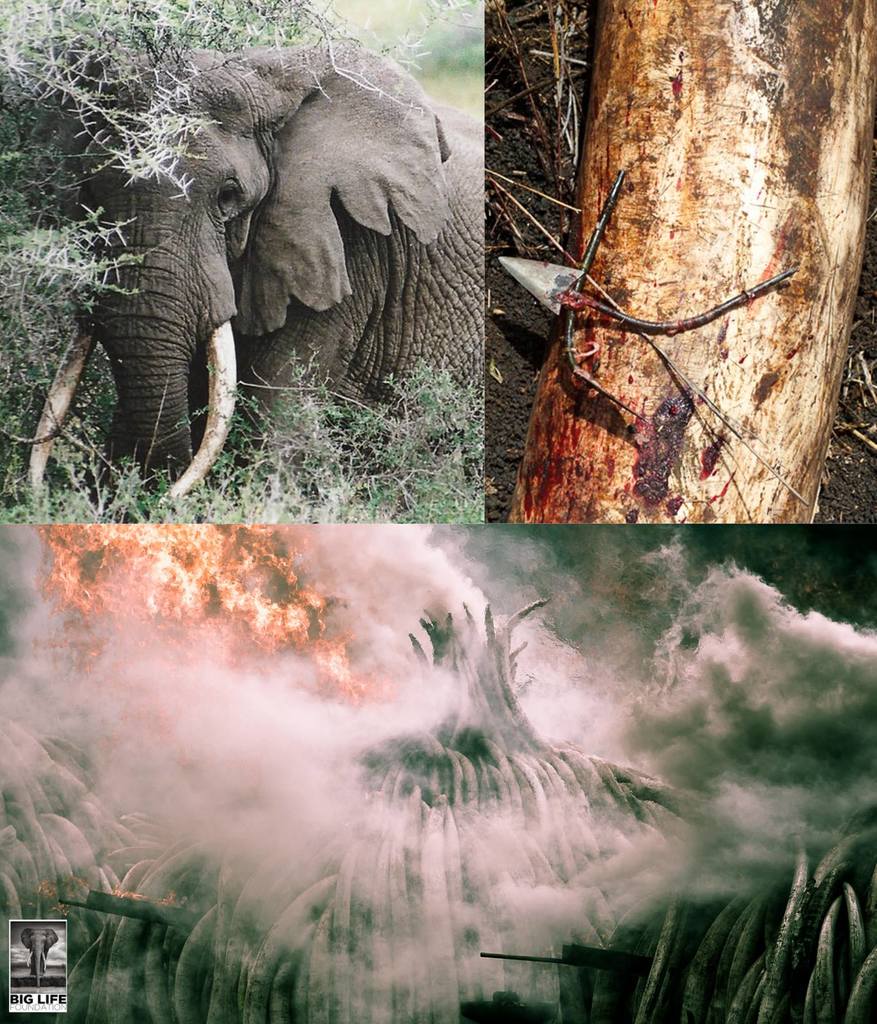 Stalin, the biggest mass murderer in human history, said ''a single death is a tragedy, a million deaths is a statistic."

When I was confronted by the 105 tons of ivory, stacked up on the pyre awaiting cremation, I was at first emotionally unmoved, because it was simply too much to take in. Then I thought of the elephants I have known - elephants that I have watched die from wounds inflicted by poachers, then been part of that gory process of chopping out their ivory. Somewhere in those stacked piles today lay those very elephants' ivory. At that point, it became personal, and emotion crept in.

Somewhere in those piles of ivory were the tusks of a grand old bull we called Torn Ear (pictured here).

I first met him in about 1990. He was a young bull then, but already showing the signs of becoming one of the giants who would stand head and shoulders above the rest. I watched him grow and his ivory get heavier and heavier. He would disappear for months at a time and we would always worry about him. Then with the help of Save the Elephants, we collared him to try and understand his movements. This made me worry even more, as the data showed him moving into an area where we had no security coverage, close to settlement and a favorite hunting ground for poachers. At this point, it became even more personal, as I was able to watch him on the screen of my computer, as he moved around the ecosystem looking for ''girlfriends'' and pasture.

Then the worst thing happened. Driving down a track through the bush, I came across him standing in the middle of it. At first I was elated, then realized that all was not well. He had a huge swelling on his stomach. As I got closer, he tried to move, but it was a movement accompanied by obvious agony. The next day, the The David Sheldrick Wildlife Trust and KWS vets arrived. Torn Ear was darted and the wound on the stomach opened up. The vet dug deeper and deeper and deeper, until it was obvious there was no hope. A poisoned arrow (pictured) had penetrated his intestines and peritonitis had set in. The only option was euthanasia.

My sense of failure got worse when I checked the map showing his movements : it showed a straight line from a watering point where he had obviously been ambushed to our base. He had come back for help.

I now looked at the stacks of ivory and realized that many of these tusks carried a similar story, that they were there because somewhere, someone wanted a piece of them, and many are prepared to kill to start that chain of supply.

My mood became less somber when I listened to President Kenyatta's speech which made clear Kenya's stand : Zero tolerance for those supplying the ivory, and no support for any form of ivory trade. If the rest of Africa's elephant rangelands states follow in these brave footsteps, Torn Ear's kind will be safe.