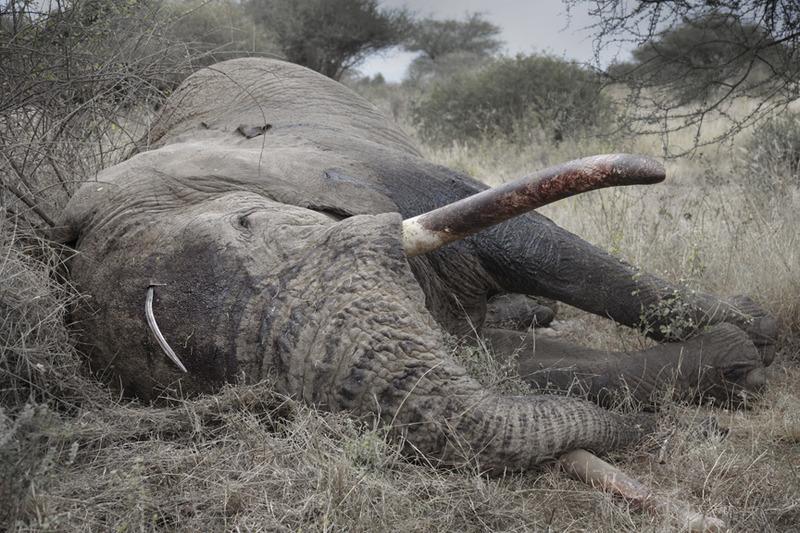 Ezra, aged 46, killed by multiple Spears including the one here in his skull, July 18

This is Ezra, one of Amboseli's oldest remaining bulls, aged 46. He died today of multiple spear wounds, including the one you see in his forehead, which he attempted to rip out but broke instead. He walked for many miles whilst fatally wounded before collapsing here. Ezra had done nothing wrong; he was just one of a number of innocent victims in an escalation of political tensions between the Kenya Wildlife Service and local Maasai communities over the share of tourism revenues from Amboseli National Park.

Yesterday, Maasai warriors within the Amboseli ecosystem rose up in protest by hunting down the area's elephant, lion and buffalo, to try and force KWS to respond, given that the Maasai are the ones who must daily interact with the majority of the animals.

Devastatingly, in the process, the very beauty of the natural resources that can provide such rewards to the community, and the very thing KWS is trying to protect, is being destroyed. It's bad enough that wildlife is being decimated to feed the escalating demand for ivory and other animal parts in the Far East. We don't need to lose beautiful creatures in this way as well.

In the eighteen months Big Life has employed 120+ rangers in the 2 million ecosystem around the park, there has been a significant reduction in poaching within the ecosystem. This can only continue with everyone working together.

We pray that the Kenya Wildlife Service will engage in a dialogue with the Maasai to resolve the issue, and help stop this heartbreaking destruction now.