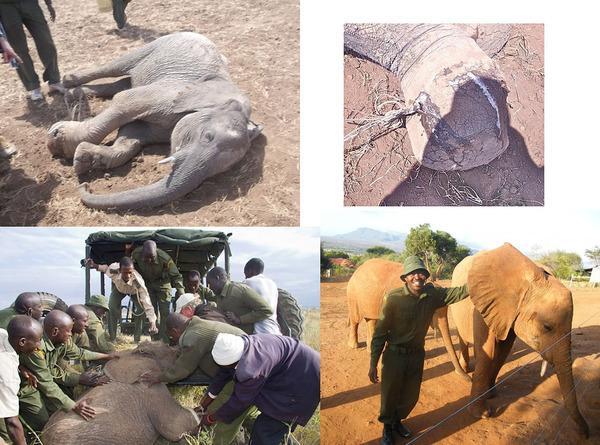 As usual, it all started with a radio call. This time, it was one of the Big Life mobile teams who were alerted by the community that there was a baby elephant that had been abandoned by its mother and could not walk.By luck, I had just flown to the Tsavo Park Headquarters for a meeting where the KWS veterinarian, Doctor Poghorn, was about to leave for his weekend. Both my meeting and Dr Poghorn's weekend were summarily cancelled, and we took off immediately for a dusty airstrip at the base of the Chyulu hills.I don’t think there is a sight that tugs the heart strings more than an injured and forlorn calf Elephant standing alone and abandoned in the middle of the savannah, head held low, trunk limp and just the occasional flap of an ear. As we approached she tried to run, but her right front foot was so swollen, she just managed a few steps and stopped. Even at a distance we could see the pus oozing out. Doctor Poghorn, in his usual efficient way, primed his dart gun and down she went.The reason for the injury then became abundantly clear: a snare that had probably been set to catch an antelope had cut its way all the way to the bone. So the first job was to cut it off, then the gory task of cleaning out the maggots and pus, and administrating literally elephantine doses of antibiotic and iodine. While all this was going on, logistics were worked out, a vehicle was provided by Ol Donyo Lodge to ambulance the elephant to the David Sheldrick Wildlife Trust Elephant orphanage in Tsavo, where she would get the best care available probably in the world, but first she had to be loaded. It is no easy task lifting a sleeping three year old calf into a pick up, but after several attempts, and lots of puffing and panting, she was in on what looked like a very comfortable bed of hay.The trip took 8 hours with Dr. Pohorn nursing the baby all the way down the road. At one stage, the sedative wore off, which necessitated an emergency stop to administer more… then on they went, arriving at midnight.One can imagine the trauma of the little calf through all this, but Dr. Poghorn tells me that in the morning, the other orphans came to greet her, which calmed her immediately. As of yesterday we hear that she is feeding and drinking, so the prognosis looks good. After all we have been through in the last few weeks, with losing the cow and calf rhino, the chance to save an elephant from a certain and lingering death has bouyed us all here.