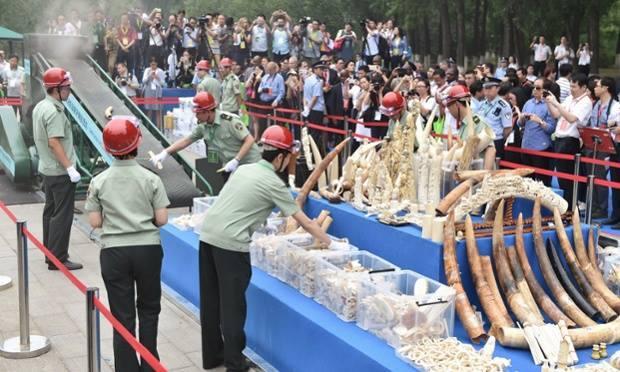 Almost to the day of the 1-year anniversary of the death of Satao, one of Kenya’s remaining Big Tuskers poached for his ivory, and on the heels of news that Mozambique and Tanzania are sustaining huge elephant losses (their elephant populations are down by 48% and 60%, respectively, in the last 5 years as a result of poaching), China announced it would phase out the domestic manufacture and sale of ivory products.

At the symbolic ivory crush in Beijing last week a Chinese official said:

This first ever statement of its kind from China, the primary consumer of ivory, is hailed by some as the “single greatest measure” in the fight to save African elephants from poaching. But others correctly point out that the announcement failed to identify a timescale for the phase-out, nor a mechanism.

Peter Knights of WildAid says the next logical step for China, and truly most significant measure to reduce poaching in Africa, would be for China to propose a total ban on ivory sales.

So while the world should continue to put pressure on China for more concrete commitments to ending the ivory trade, here in Kenya, Big Life will continue to do everything we can to protect elephants and keep ivory where it belongs, on elephants.