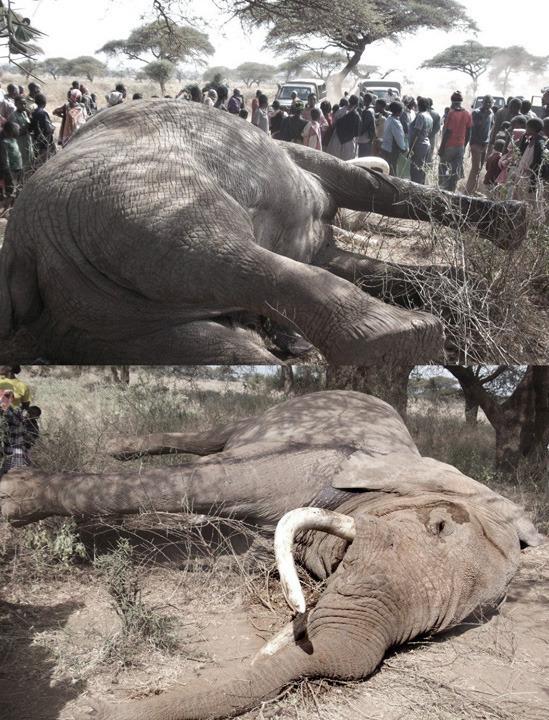 Last night, July 18, the Maasai community and council leaders announced that all wildlife killing around Amboseli was to stop immediately. A meeting was set between them and the Director of the Kenya Wildlife Service for August 6. We hope that this time, the Maasai communities' demands for a more fair share of income from wildlife/tourism will be listened to.

Be aware that this 'ceasefire' remains a tentative one. If things go badly on August 6 between KWS and the Maasai, the killing could kick back into action again.

Both sides badly need to listen to common sense now. Both parties must not allow the animals - for both, their richest source of revenue and thus well-being into the future - to be the butchered, innocent pawns tragically caught in the middle.

Meanwhile, at this moment, Richard Bonham, Big Life's Director of Operations, is in the air scouring to the north for two groups of warriors who, their blood still up, have ignored the directive from county leaders to stop the killing. This is what happens when you incite and stir things up - it's not always that easy to bring the testosterone back down.

The killed elephant in the photos was a 33 year old male elephant called Bronowsky. He was well-known as a very mellow, relaxed elephant that used to spend much time in close proximity to the Maasai bomas. It was this trust in humans that brought about his death a few days ago in the lead-up to this crisis. Whilst sleeping under a tree near the village, he was killed with a single spear to his heart. He had never hurt anyone, nor had he raided any crops.

Big Life Foundation's 70 rangers on the Kenyan side are still not allowed to go back to work in the field. Three days ago, all Big Life and other community rangers around Amboseli in Kenya were instructed to stand down by the community leaders, as they would not be safe once the warriors went on their rampage - even though the communities' problem is all related to KWS, not Big Life or other NGO's working to protect the ecosystem and its animals.

In the meantime, Big Life's platoon commander in Tanzania marshalled several Big Life Tanzanian units up to the border, to protect elephant herds that were fleeing over into Tanzania for safety from marauding warriors. Richard Bonham flew multiple sorties for two days over the Kenyan side to alert where incidents were occurriing .

But right now, the Big Life teams in Kenya need to get back into the field as soon as possible, to continue the incredibly productive work that they have been doing for the last eighteen months in protecting the animals.

In that time, due to the presence of the combined 120+ rangers in 14 outposts spread across the ecosystem, the poaching of elephants and ALL other animals has been dramatically reduced from where it was in the two years before their presence. The vast majority of the time, poachers are now successfully apprehended and arrested by the Big Life teams working in conjunction with KWS. Incidents of human/wildlife conflict have also been greatly reduced as a result of the excellent co-operation between Big Life's teams and the local communities.

This week's incidents have been heart-breaking. The politics have taken Big Life's ability to protect the wildlife out of our hands. But once the dust settles, and the teams are back at work before poachers take opportunistic advantage of the areas being unprotected, we are confident that we can keep the Amboseli ecosystem one of the few places in East Africa where the poaching is currently under control.

However, this obviously needs financial support. Operating with minimal organizational bureaucracy and red tape, currently 93% of donor money is channeled into the field immediately. As the illegal demand for ivory and other wildlife parts from the Far East continues to escalate, there will be many who cannot resist the easy profits to be made out of killing these irreplaceable creatures.

With your support, Big Life’s teams will continue to do everything they can to stop them.